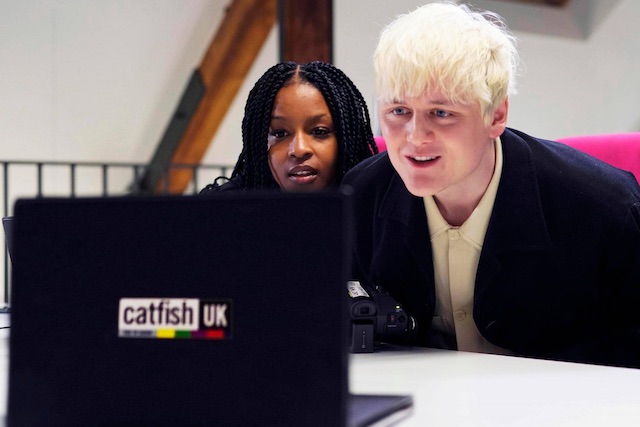 Surprised this has taken so long.

When it comes to TV that you can just switch on and know exactly what you’re going to get even though it’s a different story each time, there haven’t been many more successful shows in the last decade plus than ‘Catfish’. It pretty much has everything you want for sitting on the couch on a Sunday afternoon and watching episode after episode with no real chance of ever stopping.

With that in mind, it’s kind of surprising that it’s taken so long for a dedicated UK version of the show to emerge, but this is happening next month and will be hosted by documentary maker/prankster Oobah Butler and radio and TV presenter Julie Adenuga. You can check out the trailer for the show below, as well as read the official synopsis (although I’m fairly sure you know how both of those are going to go pretty much word for word):

In a ridiculous sequence of events, I’m hosting the first ever series of Catfish UK on MTV with @JulieAdenuga. Excited to travel the country, meet people, & figure out what it is about this moment that makes people feel like they cannot be themselves. Out next month pic.twitter.com/ntLXU7TPrc

The dynamic duo will journey to uncover the truth behind each online relationship, helping love-struck hopefuls who are emotionally entangled with someone they have never met in real life and facilitating face-to-face meetings, with results that will shock even the most experienced social-media sleuths.

During the last year, the UK has seen a rise in filters, finstagrams and faultless deep fakes. It’s now becoming harder and harder to tell if the person you are speaking to online is who they really say they are behind the keyboard.

Each week, the Catfish UK team will help piece together the information at hand to reveal the reality behind their DMs. Helping our hopefuls uncover the truth, to finally know whether it’s wedding bells or a web of lies.

Pretty much always going to be a web of lies isn’t it? Can honestly see this being even more grim/depressing/fascinating than the US version given the calibre of people that used to show up on The Jeremy Kyle Show and other horrific daytime television programmes, so I’m sure this is going to be an entertaining if not somewhat depressing watch.

Four episodes are going to be shown in April with another six coming later in the year. Just in time for lockdown four maybe?

For more of the same, check out this classic Catfish where a guy thought he had been dating Katy Perry for six years. Just sad really.