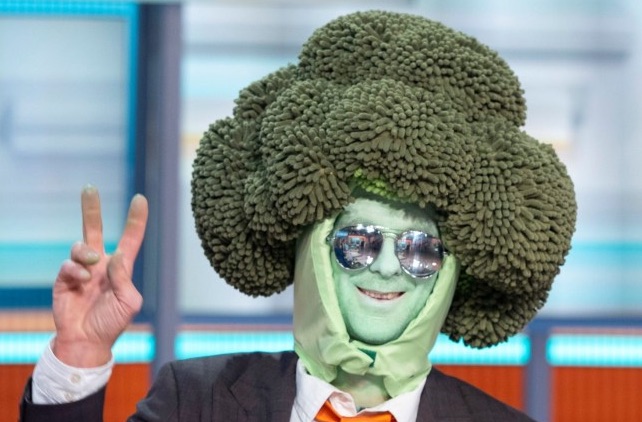 No consistency with these guys.

One of the dumbest things that came out of the Extinction Rebellion protests in London last week – and there were a lot of dumb things – was the emergence of a guy who dressed up as a piece of Broccoli calling himself Mr Broccoli and his now infamous interview with Piers Morgan on Good Morning Britain.

I’m not really sure if too many people out there were wondering as tot he true identity of Mr Broccoli, but his neighbour has decided to out him as hypocritical driver of a diesel guzzling Mercedes Van. 46 year old Roland Everson was identified by one of his neighbours in a video blog, with the neighbour claiming he runs a glamping business, setting them up clamping villages at over 50 music festivals a year in the UK, driving to them in his van.

Critics have argued that this activity makes his annual carbon footprint about as large as a return flight from Heathrow to Sydney and have accused him of hypocrisy with one of his neighbours saying:

It sounds like he has the brains of a vegetable.

Lol cool soundbyte there bro – shame you can’t put your name to it. Everson in fairness to him has released the following video statement acknowledging his identity and his reasons for the whole Mr Broccoli debacle:

I guess maybe they’re right? It seems all too easy to criticise Extinction Rebellion protesters – or anyone protesting against climate change – for not practicing what they preach down to the absolute minimum, but I think you’ve gotta really notice that they’re probably living better lives than most of us in relation to these problems. And actively trying to do something about them as well, even if that does seem to piss a lot of people off.

I suppose what I’m trying to say is that Mr Broccoli might have come across as a bit of a twat on Good Morning Britain and it’s pretty easy to poke holes in his lifestyle and what he believes, but what are any of us doing to make things better? Probably not that much. Think about it.

For more of the same, check out Mr Broccoli’s GMB appearance right here. Something else.