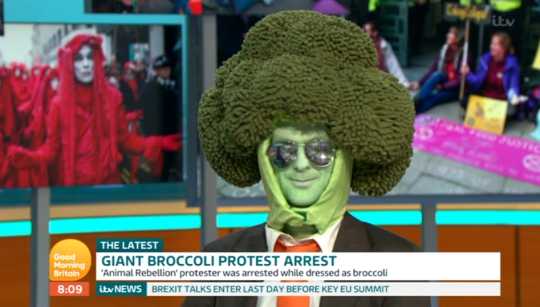 His name is Mr Broccoli.

Piers Morgan is always outspoken and always speaks over his guests and makes them look like dickheads, but it’s very rarely that they actually deserve it like the guy in this clip.

Mr Broccoli is a vegan activist who apparently spends his time dressing up like a piece of broccoli and who was arrested at the Animal Rebellion protests at the weekend – they’re a bit different to Extinction Rebellion as they’re trying to affect climate change by getting people to eat less meat. Anyway, Mr Broccoli appeared on Good Morning Britain this morning and pretty much just looked like an absolute tool as he pretended he was a piece of broccoli and just said that over and over again, before getting a banana out and pretending he was on the phone.

Morgan instead just rinsed him and said that if he had explained the reasons for his decision with science and facts then he might have managed to get his messages across a bit better and for once I actually agree with the guy:

Yeah, not really sure what Mr Broccoli was hoping to achieve with that because it wasn’t really funny in the slightest and is just gonna make people who think that vegans are twats – like Piers Morgan – hate them even more. Disappointing and pointless really isn’t it, but hey I guess someone is getting a bit of a laugh out of it at least. Just not sure who.

For more of the same, check out Morgan getting a cream pie thrown in his face. Twat.