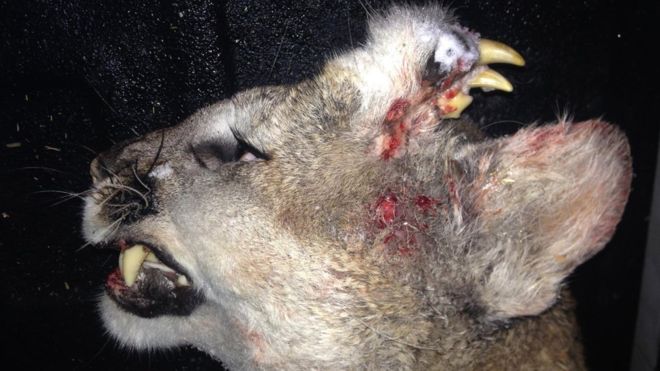 Scientists haven’t got a clue what to make of this thing.

A mountain lion shot dead by hunters in Idaho over in the US recently had a fully-formed set of teeth growing out of its head.

Scientists say they’ve never seen anything like this particular deformity before, but the Idaho Department of Fish and Game reckon it could be the remains of a conjoined twin which died in the womb, or possibly a teratoma tumour, which is like a regular tumour except it’s composed of tissue from which teeth, hair and even fingers and toes can sometimes develop. Gross.

Another theory is that the lion suffered an injury, which got infected and healed in an odd way.

It has all of us scratching our heads. It’s a bizarre situation and a bizarre photo.

The lion was hunted after it attacked a dog near the town off Weston, Idaho. The dog survived, but a group of hunters went after the lion and killed it a few hours later.

Yikes. Not really what you want to be looking at so early in the week, but since I had to look at it you do too. Just another freaky-looking creature showing up out of the blue to remind us all that nature is full of surprises.

What makes this different from all the freaky creatures at the bottom of the ocean though is that we humans don’t really have access to the deepest, darkest depths of the sea. We know there’s all kinds of fucked up looking fish down there but they’re not really anything to worry about because we’ll never encounter them in person. This mountain lion though? It was chilling on a mountain in Idaho. It attacked this guy’s dog. It’s a lion with a set of teeth growing out of the back of its head and no scientists knows what the fuck to make of it. Not exactly reassuring for anyone who wants to go on a little hike up the Idaho mountains with their dog one day.

Still, perhaps not as terrifying as this mutant pig born with a human face though (NSFW).