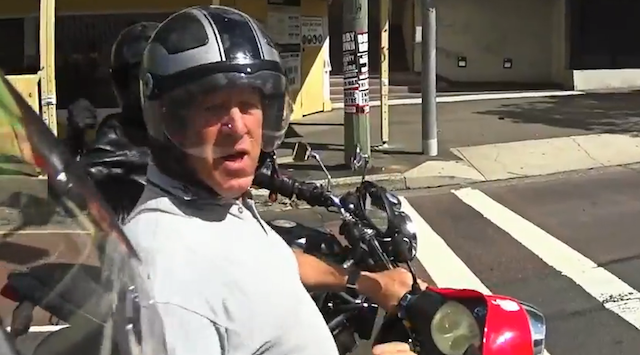 Imagine the scene – you’re riding your motorbike through a busy city when you notice a beautiful female biker across the road from you. You follow her to the next intersection where you take the opportunity to talk to her whist the lights are on red, and are really hitting it off because obviously you both dig motorbikes massively.

Unfortunately though, some absolute knob jockey on a red scooter pulls up in between the middle of you and interrupts the conversation to ask you about Casio. What an absolute douchebag – can’t the guy see that this dude’s trying to get his game on. It’s surely an unwritten code of the bro jungle that you don’t do something like this when another man is trying to score some action, unless there’s a legitimate reason for it like the girl in question is your girlfriend/sister/daughter. Come to think of it, this guy is about as square as they come so he could be her dad, although it’s hard to think that a hot biker babe could be the spawn of this dork.

Despite this being a pretty awful cockblocking, it’s probably not as big a cock block as getting a McDonald’s receipt tattooed on your arm.