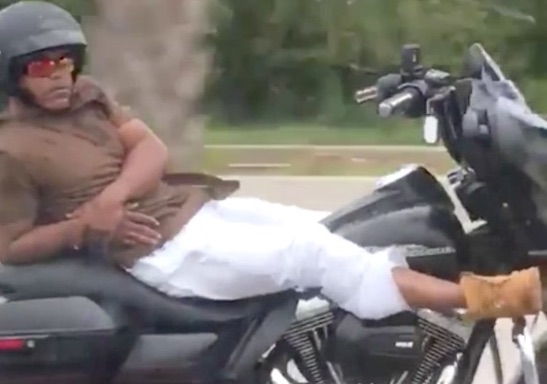 He might have a death wish, but damn does he look cool.

I’ve only ridden a motorcycle a couple of times, but even then I’ve been careful and respectful of just how powerful a machine it is and how potentially catastrophic it could be if I lost control of it. Call me a pussy sure, but I don’t wanna end up as roadkill.

The same logic doesn’t apply to this guy. He was filmed chilling on his motorbike with no hands on the I-10 down to New Orleans over in America. Not only is he driving without using his hands though, he’s also completely chilled out, leaning back and pointing at people and giving them thumbs up like he’s hanging out at the beach or on the back of a horse drawn carriage or something.

Guy is seriously too much:

Wow. Guy might have a deathwish and could end up killing a whole bunch of people as well if he loses control, but I think I’ve still gotta respect him for being an absolute legend.

How do you even grow the balls to do something like that? I reckon I could ride a motorbike a thousand more times and still not have the guts to act like that on it. Maybe I’m a pussy though, sure.

For more of the same, check out how this Norwegian gangster drinks his morning coffee. Unbelievable.