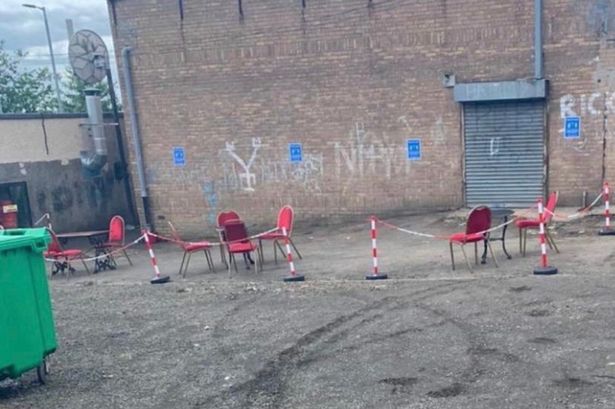 Anyone for a nice relaxing pint down The Post Apocalyptic Wasteland Arms?

A pub in Motherwell is being trolled online after being accused of having the worst beer garden in Scotland, and perhaps the whole of the UK.

The Brass Button pub, in north Motherwell, opened for business last weekend for the first time in 4 months, and was soon being ridiculed after a photo of its makeshift beer garden began circulating online:

I take it the green bin on the left is the children’s play area?

That’s a fear garden no a beer garden

There’s a little door so that you don’t have to step over the tape. Style with functionality

It gets better after the fifth.

Hat-tip to the Brass Button pub in Motherwell for this hastily-erected beer garden which looks like a delightful place to drink and definitely not the bleakest thing I’ve ever seen https://t.co/NKPhbnrNCC pic.twitter.com/Mk1rs41SBS

The fast getaway tyre tracks say it all.

You can park the car right next to your chair 🍺👍🏻🪑

I really thought this was a joke yesterday, but it is the most motherwell thing I’ve ever seen 😂

That’s a back alley not a beer garden ffs

Welp, at least it won’t look any worse at the end of the night I suppose. Apparently the pub does really good cocktails though so don’t let the post-apocalyptic beer garden put you off if you’re every passing through Motherwell.

Decent reviews on Google as well:

So yeah, maybe not the spot you want to take someone on a first date but maybe a good shout for a novelty trip with the boys. It’s popular with the locals so it can’t be that bad, right?

For the man who was arrested after doing 5 lines of coke and having a 40-minute wank in a pub beer garden in Blackburn, click HERE.