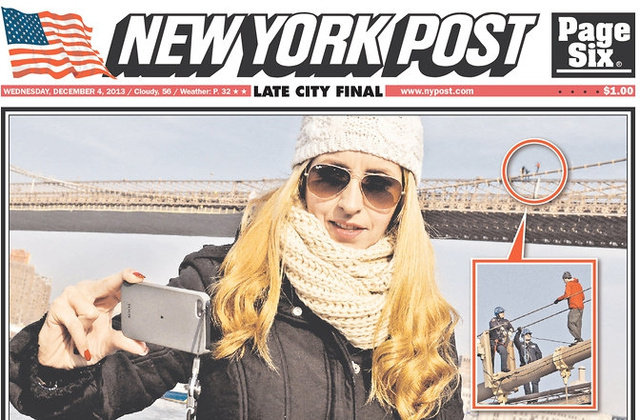 A woman took a selfie with the Brooklyn Bridge in the background, only when she looked at it she saw a man was threatening to jump off it. Awkward.

If you’re visiting the Brooklyn Bridge, who could blame you for posting a selfie of yourself in front of it? Hardly anyone right – it’s a perfectly acceptable thing to do in the year 2013. However, you should probably make sure that there’s nobody threatening to jump off the bridge and commit suicide in the background before you set it up.

That’s exactly what happened to one anonymous woman who also got splashed across the front of the New York Post today for her part in the incident. In fairness, according to the report the woman actually went to the bridge and saw the guy committing suicide and then actually took the selfie deliberately to get the guy in it, which however you look at it is all kinds of crass and definitely not politically correct or cool. It is pretty awesome that someone managed to get a shot of her taking the selfie for the post though – that’s all kind of meta.

Apparently when she was approached for a comment about taking a selfie in front of a sucidal man jumping from a bridge, she became camera shy and said ‘she would rather not’. Later on, the guy who took the photograph said that he was pretty sure she was a tourist but couldn’t place the accent. It seems unlikely we’ll ever hear from her again, unless she starts popping up taking selfies in other highly inappropriate situations. We can but hope.

If anyone cares about the suicide case, he ended up getting talked down by the police and not jumping, so I guess that woman’s selfie isn’t as good as she was hoping it would be.

â˜›  More Selfies: Guy Tries To Seduce Girl With Cringe Selfie, She Puts It Online And Sends It Viral 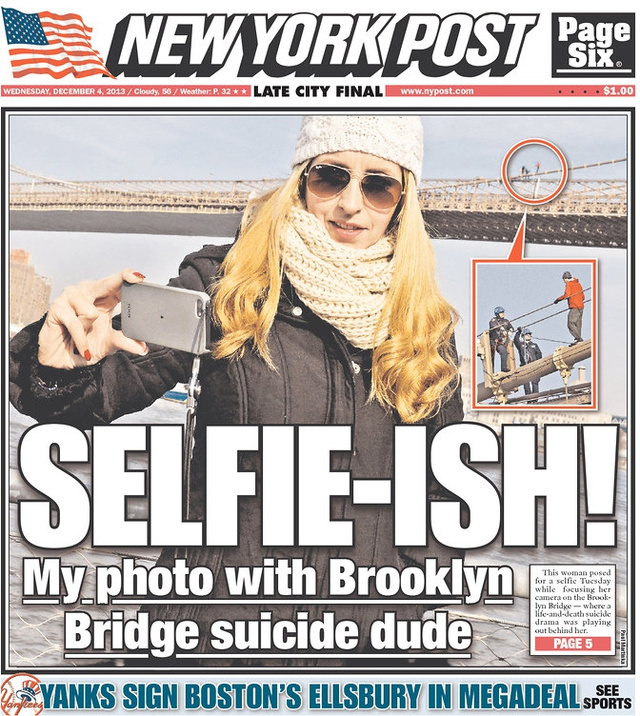