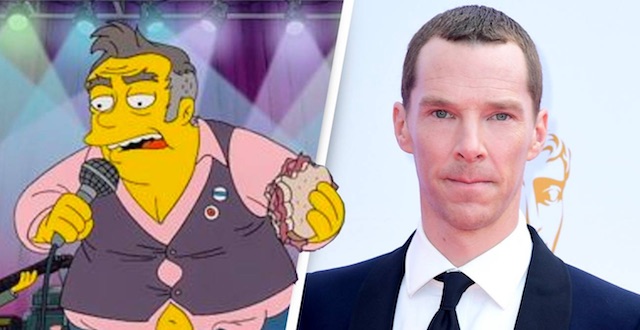 I wasn’t really aware that people out there were still watching ‘The Simpsons’, but apparently a new episode depicting an overweight depressed 80s singer from Britain has ruffled a few feathers with Morrissey, who it seems the character is quite clearly based on.

The guy was named Quilloughby and voiced by Benedict Cumberbatch of all people and was featured in a recent episode called ‘Panic In the Streets Of Springfield’ – subtle –  where he became Lisa’s imaginary friend. Not really sure what else happened in the episode, but Morrissey’s manager Peter Katsis has posted two long messages via the singer’s Facebook page – the first of them originally unsigned – calling out the creators of the show for being so hurtful and racist towards old Mozza:

Wow, why don’t you tell it like it really is Mr Katsis hey? Don’t leave anything out there.

I’ll be straight up and say I haven’t seen this episode of ‘The Simpsons’ and probably never will considering I haven’t watched the show in years and pretty much everyone out there can agree that it’s just not that funny anymore, but wasn’t the whole point of it that it just satirises celebrities and uses their well known characteristics to make them seem as dumb as possible? Pretty sure that’s been the case with every depiction of one who’s ever appeared on the show over the years – and there are a lot of people – and typically Morrissey is the only one who has ever got butthurt about it and not just laughed it off as a joke.

I suppose we shouldn’t have expected anything less of the guy though really should we? Been playing this role for years now. Cheer up guys – it’s just ‘The Simpsons’ FFS.

For more of the same, check out this guy who recently reimagined ‘The Simpsons’ as a bleak British comedy. Morrissey would probably be into that.