Putting race and gender politics back about 20 years.

When it comes to politics, there’s one thing that pretty much everyone can agree on and that’s that you don’t do anything to soil the memory of war veterans because they’re simply off limits for what they’ve done for your country, regardless of your political persuasion.

So I’m not really sure what Southampton student president Emily Dawes thought she was going to achieve except complete and utter condemnation when she tweeted that she was going to paint over a mural depicting war heroes who died and were unable to receive their degrees from Southampton because they were all white men. Here’s what she said yesterday: 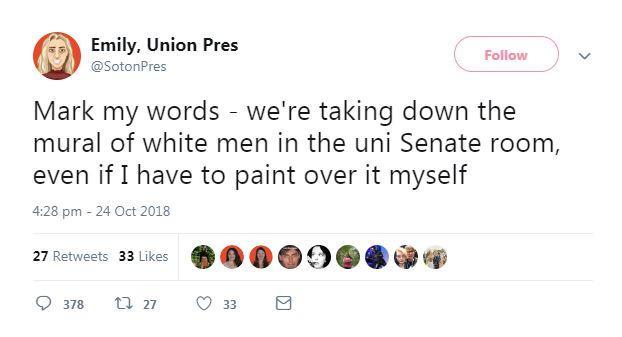 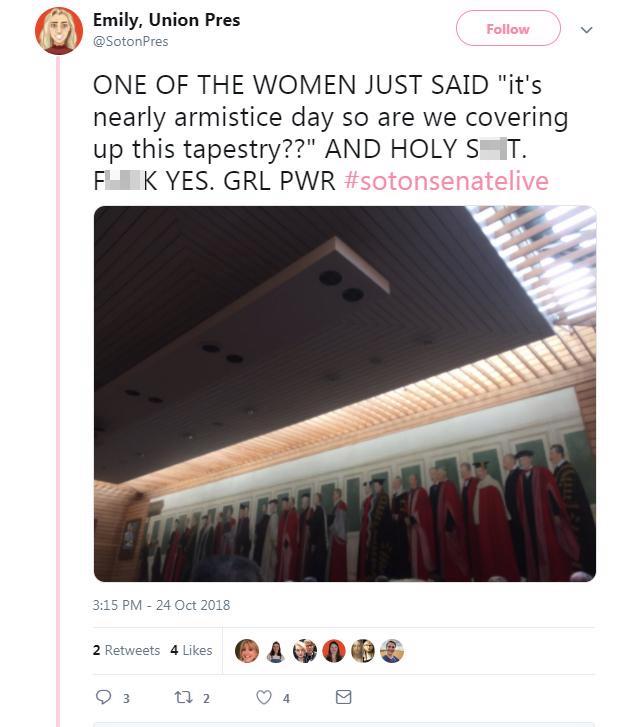 OK, so whilst I admire Emily’s efforts to create a space that isn’t solely dominated by white men and is more inclusive for minorities/other subsections of society/whatever is the correct political term for them at the moment, I’ve gotta say that this is absolutely one of the worst and most offensive possible ways she could be going about it. I think this guy’s tweet pretty much perfectly sums up why this is so:

I mean yeah exactly – from how the conversation has been presented, it doesn’t seem like any women or black people were enrolled at the University and sent to war and so none of them died and none of them can be featured on this mural because that would make it factually inaccurate. Yes, you could have some argument about the fact that no black people/women were enrolled at the university in 1918 or sent to the war in 1918, but that’s literally 100 years ago and that problem has been solved now. Or is at least on its way to hopefully being solved if we’re going to be pedantic about it.

To try to make like of the fact that there are only white men in the mural when this is factually correct and subsequently dishonour the memory of these men who literally gave their lives so that the university could continue to operate and you yourself could essentially study there is only moronic and hateful but also completely disrespectful. Moreover, it’s exactly the kind of offensive rhetoric that Emily is trying to halt with her campaigning for the inclusion of all minorities, just aimed at a subsection that is currently dominant in society for something that they can’t actually do anything about because it happened 100 years ago. Great move Emily, you probably just made yourself a poster girl for anyone that doesn’t want to have this conversation and pushed back gender/race relations about 20 years. Way to go.

Predictably, the student union president has been forced to issue the following grovelling apology, saying that she didn’t expect anyone to take her comments seriously. That’s kinda rich considering that literally her WHOLE Twitter timeline is about destroying white male dominance and promoting minorities and she tweets about this issue about every five minutes. How could anyone NOT take her seriously?

Anyway, if any good has come of this maybe it’s that it will raise awareness of white male dominance in society and how the prevailing culture needs to be more inclusive of females and minorities. Fairly sure this isn’t really going to happen and everyone will just remember the girl who wanted to paint over a war memorial though unfortunately though. So it goes.

For more of the same, check out this woman pissing on a war memorial. She ended up going to jail for her crimes so watch out Emily.