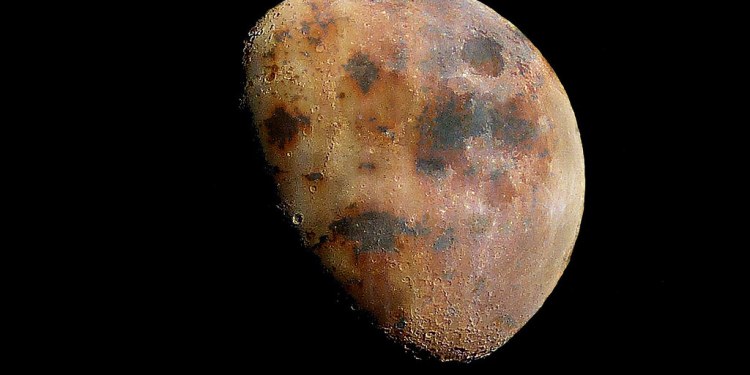 As if 2020 wasn’t enough of a clusterfuck on our end down here on Earth, we now have news that the moon is “rusting” despite the fact that should be basically impossible given its atmosphere.

In new research published by Science Advances, its theorised that the rust may be a result of water discovered on the moon, but it’s still shocking considering the lack of oxygen and dearth of water on Earth’s celestial satellite.

Among the perplexed experts is the study’s lead author, Shuai Li of the University of Hawaii:

It’s very puzzling. The moon is a terrible environment for hematite to form in.

Although oxidizing processes have been speculated to operate on the lunar surface and form ferric iron–bearing minerals, unambiguous detection of ferric minerals forming under highly reducing conditions on the Moon have remained elusive.

Our analyses of the Moon Mineralogy Mapper data show that hematite, a ferric mineral, is present at high latitudes on the Moon.

At first, I totally didn’t believe it. It shouldn’t exist based on the conditions present on the moon.

There you have it. The moon rusting is so weird and unlikely that even the world’s foremost experts can’t make sense of it.

With the countless ways humans have managed to fuck up Earth during our time here, the one thing we could always count on was the moon chilling up there in the sky and looking good. In fact if you look up into the sky at night, it’s probably the most beautiful showpiece of the entire solar system. And now? Now it’s just turning into rust. How long before the moon becomes an actual eyesore looking like a dilapidated building in Birmingham or something?

If Elon Musk and his buddies ever do take the human race onto Mars, you have to wonder if the state of the moon by then will drive down property prices. I know that’s not something to worry about now but still, it’s something to think about. That’s if we even have a galaxy to move into by the time 2020 is over with. Interesting times we live in for sure.

Could it have something to do with those witches putting a hex on the moon back in July? Makes ya wonder.