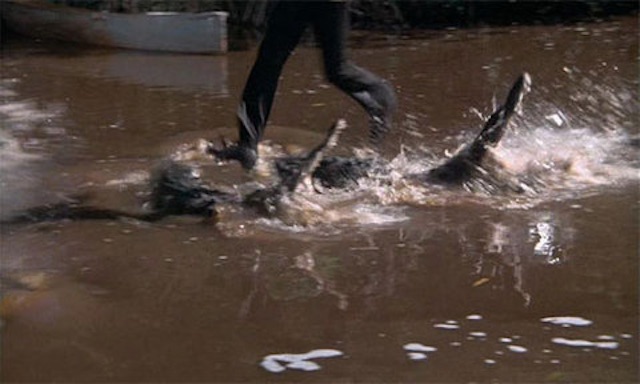 I remember when I was a young kid and the James Bond movies were always on TV that ‘Live And Let Die’ was by far my favourite because Baron Samedi was a major bad guy and because of the part where Bond got stranded on an island but then ran across the mouths of the crocodiles to get out was completely badass. The theme song was pretty badass too although the Guns N Roses version is obviously better.

However much I loved that scene with the crocodiles though, I never bothered looking into how it was filmed or anything and it turns out that they used actual crocodiles for the stunt and some absolute mad man ran across their mouths in real life. I suppose they didn’t have CGI or animatronic robots back then or whatever.

Anyway, the footage is completely crazy because the guy had five attempts at getting it right before he managed to nail it and each one looks more dangerous than the last one as the crocodiles are not happy about this idiot jumping all over their mouths by any means. Get a load of this:

The moment in LIVE AND LET DIE (1973) where Bond steps across a row of crocodiles was real.
Crocodile farm owner Ross Kananga (whose own father had been eaten by a crocodile) did the stunt.
He succeeded on his 5th attempt.

Can’t believe that actually happened and that guy was more than happy to run it as many times as it took to get the footage. Like I said, I guess things were a bit different back in 1973 but even so that’s still kinda crazy to me. Fair play to Ross Kananga – my childhood would not have been the same without your contribution.

For more of the same, check out this supercut of James Bond’s most outrageous moments. Hard to see how this actually got made.