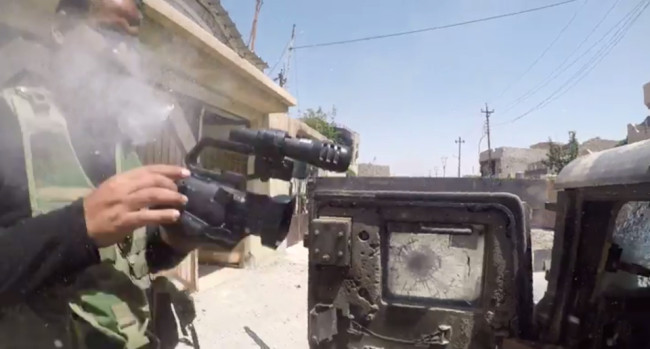 Talk about dodging a bullet.

Being a journalist and heading into the war zone for your stories is going to always be a dangerous time, but videos like the one below really do drive home how it’s not just the soldiers who are risking their lives over there.

In the video below, we’re over in Mosul where Iraqi forces are said to have captured 90% of ISIS forces, but there are still some snipers lurking in the shadows. Journalist Ammar Alwaely was hanging out in a neighbourhood which he had told had been cleared, and thus assumed that he was safe. Unfortunately for him though, this wasn’t the case at all as a sniper targeted him and fired at him square in the chest.

Incredibly, Alwaely wasn’t hit because the bullet struck his GoPro camera which was strapped to his chest. It exploded in his face and cut his lip, but miraculously he was still alive:

Sheesh – that’s pretty much the definition of a close one. Sun journalist Owen Holdaway – who was sitting inches away from Alwaely in the video, said the following:

At first I did not know what happened. I fell to the floor and could not turn around to see if Ammar was ok.

Crawling along to behind the vehicle, I eventually looked up and saw it had hit my old GoPro that I had given him just a few days earlier.

The explosion had smashed the camera, spraying plastic into his face and cutting his lip.

I mean, talk about dodging a bullet – literally. Another great use for GoPros as well I suppose.

For more snipers, check out this story about a British sniper who managed to kill six Taliban fighters with one bullet. Baller.