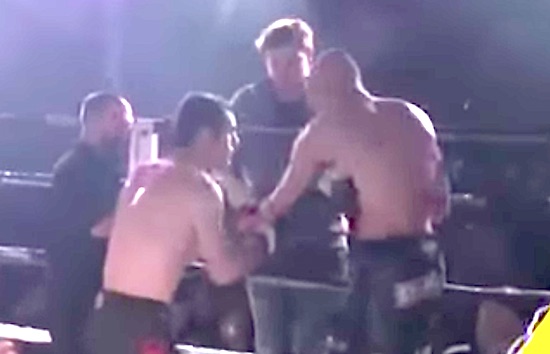 One of the best aspects of the MMA community is the genuine respect that most fighters seem to have for each other, despite the fact that their job is to beat the shit out of their opponents.

Most of the time you see fighters touch gloves before a fight and embrace each other warmly at the end, but the scene in the video below really is something else. I’m not sure where this fight is going down, but Arkadiusz Wroblewski misses with a massive haymaker attempt that results in the dislocation of his shoulder. His opponent Paata Tschapelia played doctor and just went right back up to him and popped it back in so they could continue fighting.

Nice. Predictably, Paata went on to win the fight in the first round by a TKO at 3:52 but it’s not really about that – it’s about how the pair of them wanted to compete so much that they didn’t even let a dislocated shoulder get in the way of it. That’s what I’m talking about.

For more signs of respect within the MMA world, watch this video of Conor McGregor’s opponents before and after they’ve fought him. They’ve got to give the devil his due after Conor’s battered them.