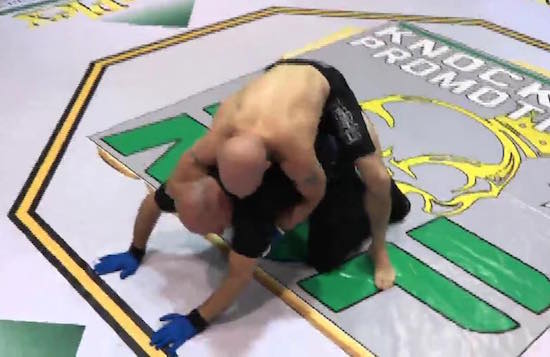 MMA is a sport where the end of a fight can often be controversially judged, as it comes down to the referee’s ability to determine whether a competitor can no longer adequately defend themselves or not.

As such, fighters aren’t always happy with the decisions given against them, but I’ve never seen anyone react like Joseph Nehm did last week after he was ruled as KO’ed by the ref in his fight with Ryse Brink after about 20 seconds. Whilst Brink was celebrating, the camera panned back to Nehm who had decided to put the referee in a rear naked choke because of the decision.

Watch out for the stupid idiot commentating on this as well – you’ve been warned:

Lol. I love the way that his cornermen have to jump in to get him off the ref but even then he takes almost 30 seconds to release the choke. I can understand why he would be pissed after he trained really hard for the fight, but he probably should have put up a better defence rather than getting the shit kicked out of him eh? No need to take it out on the ref.

I suppose you could assume Nelm thought that the ref was his opponent because he was so out of it, which was why he held the choke in for so long. That probably makes more sense, but I like the idea that he was so angry with the ref that he attacked him more because that never happens.

For more refs getting a hard time, check out these Brazilian football fans decapitating the ref after he stabbed a player. Slightly more extreme.