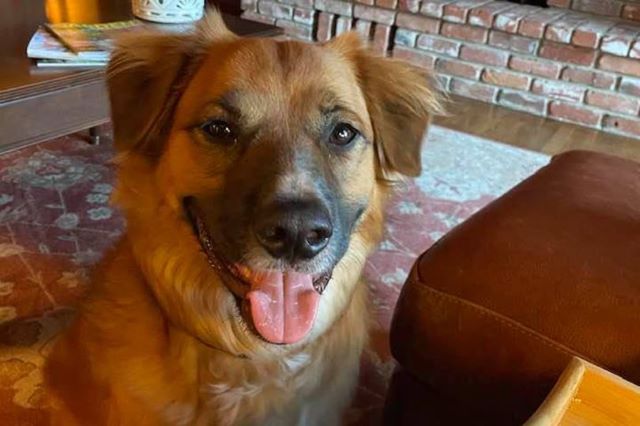 A two-year-old border collie mix named Tilly went missing following a car crash, in which he was launched out of the car and ran from the scene in a high-speed panic.

After the accident, Tilly’s devastated owners, Linda and Mike Oswald, couldn’t find their dog anywhere and put up posters, but feared they would never see him again – until they heard from Travis Potter, a sheep farmer.

Turns out Travis had been given the heads up about a missing dog by his grandma who saw a post on Facebook, and funnily enough then found Tilly himself – herding the sheep in the field around his house.

Mike and I were in a car accident today at highway 41 and Hayden. We are good but my dog Tilly is missing. He was thrown out and was seen running north.

He is reddish-brown male with back markings on his face. He has medium long fur and a bobtail. He was last seen running across the Prairie at Hayden Ave and highway 41.

He is shy so please pm me or contact me via FB if you see him or contact KC or PF animal control or humane society. He may be in Rathdrum.

Speaking to Global News after Tilly was found, Linda said:

He’ll herd anything. When I go to the dog park, he tries to herd the people into one group.

Now that’s what you call a good boy. Just saw some herding that needed to be done and went to work, no questions asked. And shortly after a near-death experience, no less! I guess maybe it was that near-death experience that made Tilly realise that life is too short to not do what he was born to do (sorry, still can’t get over the fact they named their male dog Tilly.) Maybe he spotted the sheep that needed to be herded as he was being ejected from the car?

Either way, another huge W for the dog community. They don’t even know what very good boys and girls they are, and that makes them even more lovable.