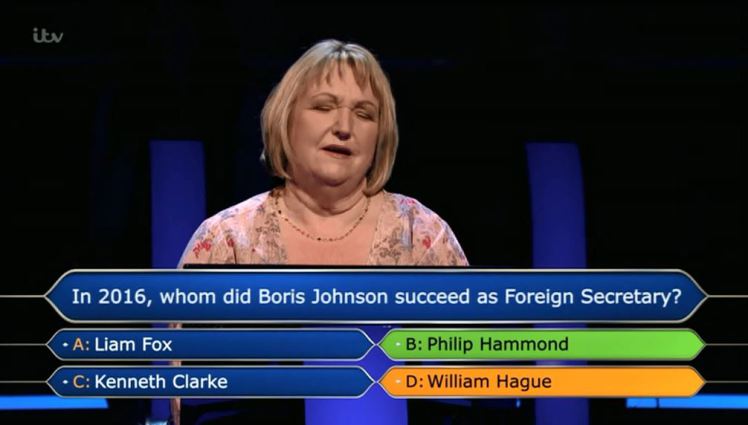 Oh, Who Wants To Be A Millionaire? The recent run has brought back fond memories of being a young teenager and watching it eagerly every night with my family and regularly laughing about how dumb some of the people were who managed to get on.

Thankfully, the recent 20th anniversary shows have rekindled that joy and everyone was saying the same thing yesterday when Lynn from Cambridge showed up. She spoke initially of hoping that she could win enough money for a new conservatory or a Bugatti Chiron for her husband and things were going pretty well as she sped through the £64,000 question with a couple of lifelines left.

Unfortunately she was stumped when asked who had preceded Boris Johnson in his role of Home Secretary. She immediately discounted Philip Hammond and chose to use the new ‘Ask The Host’ lifeline, but Clarkson wasn’t much help and said he would guess it was William Hague.

Lynn then decided to phone her husband Ian in an attempt to get the answer and he was fairly certain it was indeed Philip Hammond and not William Hague. Didn’t mean that Lynn was going to believe him though, did it?

Damn, why couldn’t she have just listened to her husband eh (probably what every guy ever said when they saw that), but I guess she wanted to be her own woman and trusted Jeremy Clarkson more – that’s never a good move.

Won’t be able to buy that conservatory any time soon and will probably get rinsed at dinner parties for the rest of her life about it too, so I’m pretty sure she’ll pay the price if being a viral meme hasn’t already made her feel completely and utterly terrible. I guess you have to go with your gut though and if she had been right it could have all been so different. Didn’t go down like that though did it?

For more Who Wants To Be A Millionaire, check out this really cocky contestant get the first question wrong. Loser.