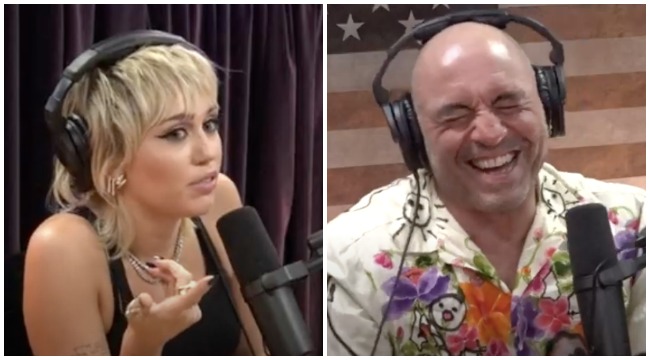 ‘The Joe Rogan Experience’ is the most popular podcast on the planet and you can’t take that away from the guy, but I often think that he comes across like a bit of a dickhead on it so it’s great to see Miley Cyrus of all people show up on it and completely rinse him to his face.

Typically when anyone appears on Joe’s show they’re really nice to him and just spend the time complimenting him and being all buddy buddy with him leading up to the point where Joe asks them if they’ve ever tried DMT, but Miley wasn’t having that at all. Whilst they were pulling up clips of Miley’s beloved ‘Ru Paul’s Drag Race’, Rogan commented that all drag queens had pretty much the same routine and she did not like that at all, quickly firing back at him with a pretty neat cuss:

Joe Rogan was NOT ready for that 😭 pic.twitter.com/DdBr3gvySM

Sassy. Thankfully it sounds like Rogan found it pretty funny so he won’t be launching some vendetta against Cyrus and cancelling her, but you’ve gotta think that it probably shook him up a bit considering how everyone who comes on the show normally is just sucking his dick the whole time.

Shout out to Miley as well for highlighting that just because you’re not into something it doesn’t mean you have to be condescending and mean about it and say that there’s no talent or skill involved with it. Arguably way more goes into drag queen routines than presenting a podcast and even with all that spare time for extra creativity and inventiveness, most episodes of the Joe Rogan Experience are annoyingly formulaic and boil down to a guy talking about drugs. She completely killed it.

For more of the same, check out this dude who has 29 tattoos of Miley Cyrus and says it’s stopping him getting a girlfriend. You think?