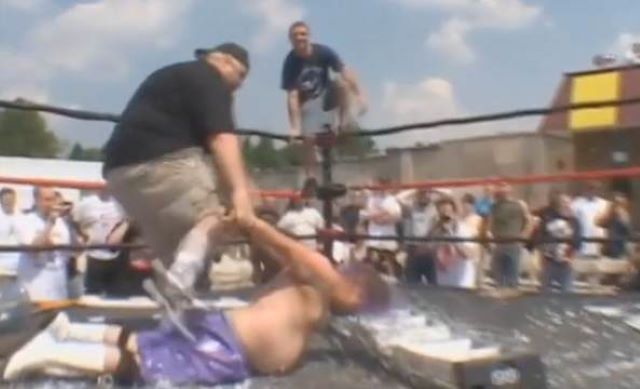 One of the most despicable scenes in wrestling history.

So this is an infamous bit of wrestling history known as the ‘Mike Levy Incident’, which took place back in 2008 during independent promotion IWA’s Queen of the Deathmatch tournament in Sellersburg, Indiana.

Mike Levy, an inexperienced, autistic, indie wrestler was taking on female wrestler Mickie Knuckles in the semi-finals, and throughout the match apparently stiffed her a bit too hard and left a massive welt on her head. In addition, he also “no-sold” (wrestling speak for not reacting) much of Mickie’s offense. A big no-no in pro wrestling! Well, unless you’re The Undertaker.

I’ll let the narrator on this video explain it better – but it resulted in one of the most awful and despicable scenes I’ve ever seen in wrestling. Watch below:

Man, what a load of utter scumbags. I don’t know what’s worse – the way they treated Mike Levy or how much the audience seemed to enjoy it. Can’t believe the owner’s pre-teen son even ran out and started battering him with a stick. How can you not feel terrible for the guy?

You’d think this incident left the realm of professional wrestling and would instead be considered assault/gang violence, but according to Wikipedia, nothing came of it:

The incident garnered heavy backlash and was investigated by Indiana police, but no charges were filed.[9] According to Rotten, the attack was staged and Levy was allegedly “told upfront he was going to take an ass whooping.”[10] Levy is still active in the North Carolina independent circuit.[11]

Well I don’t know how true it is that Mike Levy knew that was going to happen, but it’s still pretty surprising that the whole ordeal didn’t put him off wrestling for life. I guess he just saw it as a learning curve? In which case absolutely everyone involved in this clip is a moron, including Levy himself. But that’s hardly breaking news when we’re talking pro wrestlers.

For a look at how former WWE star Sunny is now making £250,000 a year on OnlyFans, click HERE. Not bad work if you can get it.