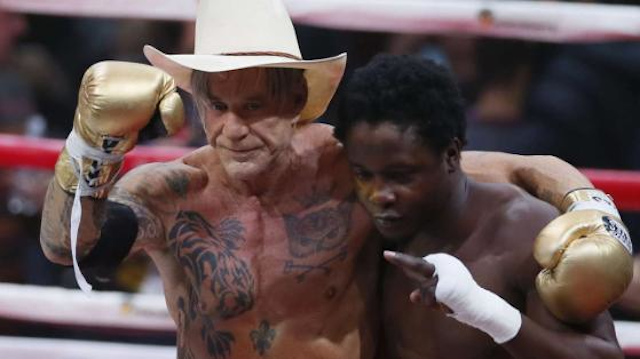 He’s finally come out and admitted what most of us knew all along.

Mickey Rourke hit headlines for the first time in a while about a month ago after he managed to knock out a much younger opponent – 29 year old Elliott Seymour – within a couple of rounds during a fight that for some reason took place in Russia.

At the time, the fight itself looked VERY fake and pretty much everyone out there thought it was ridiculous that an ageing 62 year old Rourke had managed to legitimately defeat this sprightly 29 year old. At the time Seymour denied any wrong doing, but he’s now finally cracked over the weekend after saying that the pressure of lying for so long had got to him. That, and that Rourke’s people were a bit slow delivering the payoff to him. So that’ll be the real reason eh?

Seymour told TMZ (duh) that he accepted $15,000 for taking the fall and that he was set to be paid $10K before the fight and $5K after taking the dive. He agreed to go down to a body shot in the second round and also revealed that the entire fight was choreographed to make Rourke look like a sick head. Unfortunately the choreography clearly wasn’t good enough as it just looked like a fake fight.

Rourke’s people have of course fired back to these remarks (way quicker than if they were organising a payoff) and denied them categorically, saying that Seymour is just doing whatever will make him the most money. Sounds fairly plausible, but again all you really need to do is take a look at that fight to know that it’s a fake.