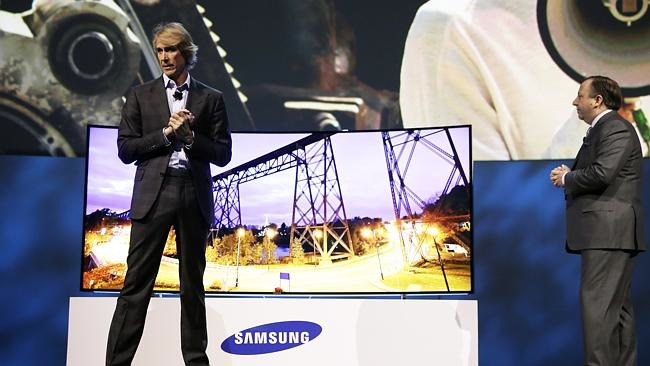 Michael Bay was chosen by Samsung to promote their new ultra high definition television – known as The Curve because, surprise, it’s curved – at the Consumer Electronics Show over in Las Vegas Nevada.

To be fair, Samsung probably couldn’t have picked a better person to promote The Curve as Michael Bay is well known for his movies being full of huge explosions and giant set pieces and so it’s only natural that he would want people to experience these in ultra high definition, even on the small screen. Unfortunately for Samsung though, Michael Bay completely and utterly screwed up the presentation.

It started pretty well with Bay being introduced on stage and Samsung’s executive vice president Joe Stinziano asking him a a few questions. Unfortunately, it quickly becomes clear that something is wrong and this is confirmed shortly afterwards when Michael Bay says the teleprompter is broken, but not to worry because he’s just going to ‘wing it’. Alas, this proves too much for him again and shortly afterwards he has to walk off the stage, stating that he’s sorry but he can’t do this. Awkward.

Bay offered the following statement on his blog shortly afterwards by way of an apology:

‘Wow! I just embarrassed myself at CES. I rarely lend my name to any products, but this one is just stellar. I got so excited to talk, that I skipped over the Exec VP’s intro line and then the teleprompter got lost. Then the prompter went up and down — then I walked off. I guess live shows aren’t my thing’.

To be fair, him walking off like this has probably got The Curve more publicity than if he just did the presentation, so there isn’t really that much damage to the product, it’s just Michael Bay who looks like an idiot. If you’ve seen any of the Transformers movies though, you probably already know that.