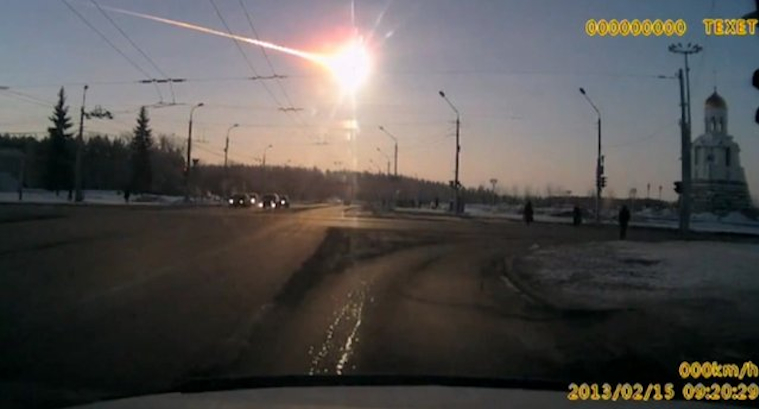 If you told me that I’d wake up today to news that a huge meteorite had slammed into Russia and there were a bunch of awesome videos of it, I would probably have said you were crazy. But it happened.

This is fvcking cool. Pretty much every day I get up and have to write stuff for Sick Chirpse, so I’m always scouring the net looking for cool or weird stuff that is going on but I never, ever  ever thought that I would ever find anything as cool as this that actually happened in real life. Everyone had a boner for meteors back in the 90’s because of movies like Deep Impact and Armageddon but nobody really seems to talk about them too much anymore, but hopefully that is going to change after today though because a meteor slammed into Russia and there’s loads of video footage and it’s probably some of the coolest stuff I have ever seen.

The footage is awesome and actually looks like something from Deep Impact with a fireball hurtling across the sky and then the whole ground/sky lighting up as it impacts and blows out every window in the city. It’s seriously incredible, I like actually can’t get over the fact that it’s real and that this actually happened. It’s also really surprising that hardly anyone on my newsfeed seems to be talking about it, at least in comparison to how many people were talking about Oscar Pistorius yesterday when this is about a million times cooler than some weirdo with no legs blowing his girlfriend’s brains out.

The meteor itself landed in the Chelyabinsk region of Russia – which is somewhere in the Ural mountains – this morning. It blazed through the sky before it exploded, blowing out the windows of a bunch of buildings as well as full on destroying a few too. 3000 are estimated to have been damaged. Over 1000 people are said to have been injured in the blast and 46 are still in hospital. Thankfully nobody has died yet which is awesome because we can just appreciate how cool it is and how cool these videos are without having to feel bad about it because it’s only some dumb Russian buildings that were probably derelict and gross anyway that got messed up. Sure, people got injured but none of them are said to be serious so that’s all cool. It’s probably just a bunch of Russians who got drunk and fell over anyway and they’re just blaming it on the meteor. That’s definitely the kind of thing that would happen over in Russia because as we know all too well here on Sick Chirpse that place is screwed up.

â˜› Watch This Next: The Ultimate Meanwhile In Russia Video

It’s already being reported that a bunch of Russians in the area smashed their own windows after the blast in the hope that they would receive some kind of compensation for it. This seems kinda dumb to me because surely you would just get another window? Is there really that much of a difference in quality of windows? And you would probably be freezing for at least a couple of weeks before the insurance company paid out!? Dumb.Others started selling rocks on eBay claiming that they were fragments of the asteroid. Only in Russia huh? There was also a pretty great reaction from some guy called Vladimir Zhironovsky who’s a nationalist leader over there who said ‘it’s not meteors falling. It’s the test of a new weapon by the Americans’ which is probably one of the dumbest/most retarded statements that anyone has ever made.

There isn’t really much else to say about it except that it is totally awesome, and the video I’m embedding below is a news report anyway so they can tell you anything I missed in this write up (if you even read it) so just sit back and watch a meteorite slam into Russia. Maybe spark up a zoot for it too.