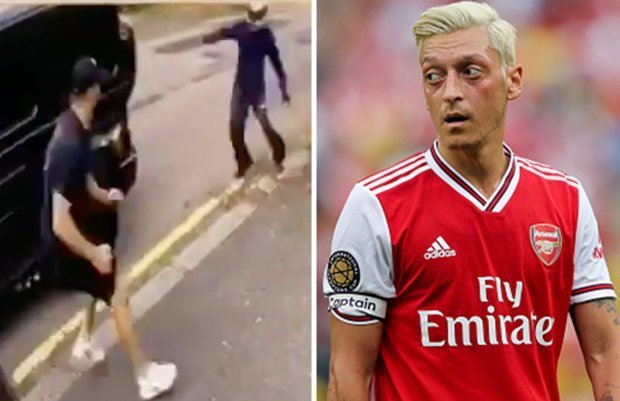 This crazy video of Mesut Ozil being attacked by a moped gang in Golders Green, London just popped up on Twitter. Lucky for him, Arsenal teammate Sead Kolasinac was there to save the day.

The Sun has the details:

MESUT OZIL was forced to “run for his life” as he and Arsenal team-mate Sead Kolasinac were the victims of an attack by knife-wielding moped thugs in London today.

German World Cup winner Ozil was seen racing down Golders Green Road in his black Mercedes G-Class SUV as the mopeds chased him. Kolasinac is then seen leaping from the £100,000 vehicle and fighting off the armed robbers with his bare hands on camera.

Ozil then abandoned his car and fled the road on foot, taking refuge in nearby Turkish restaurant Likya. Staff immediately rushed to his defence, piling out onto the street to help chase away the attackers.

“I saw him disappear into the restaurant with the motorcycle guys on his tail. They didn’t take off their helmets and were all in black, wearing long sleeved tops in this hot weather. They stood out. It was really creepy.

“God knows what would have happened if they’d caught him. It looked to me like he’d have been hacked to shreds and he clearly thought so too.”

Good on Ozil getting himself and his wife to safety and hiding out in a Turkish restaurant. That was probably the right thing to do. What an absolute legend Sead Kolasinac is though. I mean he always looked like a tough dude but this just confirms it. The guy entered a knife fight with just his fists and won. I don’t really rate him too highly as a player as he’s a bit erratic but on this evidence, definitely a guy you want on your team when attacked by a knife-wielding moped gang.