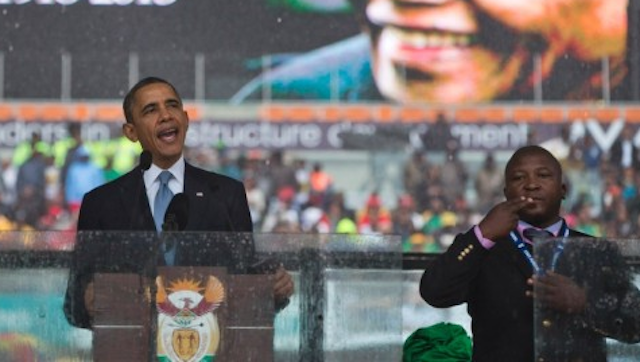 In a remarkably quick time, someone has set up a fake Twitter account for the fake Nelson Mandela signer that reflects what he was saying during the service i.e. complete nonsense.

As we covered earlier today on the site, the guy doing the sign language at Nelson Mandela’s memorial service yesterday was completely blagging it and didn’t actually have a clue what he was doing during the service. Obviously this is kinda funny in a WTF were they thinking kind of way but also kind of tragic as it was the funeral of one of the greatest politicians of the past century and there really should have been more respect involved with the whole process.

Of course though, some smart alec decided to jump on the bandwagon and create a fake Twitter account for the dude and it’s pretty much hilarious as every tweet is just a bunch of words arranged in a way that makes them make no sense at all, kinda like his sign language. Or who knows, perhaps this is his actual real Twitter account and this is just how his mind works, which would explain his actions yesterday.

Here’s a bunch of the best tweets so far.