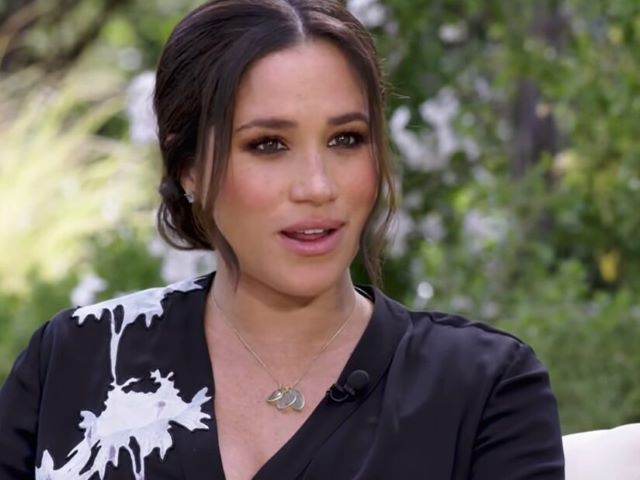 Meghan says she is not afraid of the consequences of speaking out.

The Oprah interview with Prince Harry & Meghan Markle this Sunday is set to be the must-watch television event of 2021, with many people extremely anxious as to what Harry & Meghan are prepared to say and reveal about their treatment at the hands of the Royal Family.

If this new preview clip is anything to go by, the Queen will not be happy. Especially as Meghan straight up accuses her and the Royals of “perpetuating falsehoods” – a fancy way of calling them big, fat liars!

The Duchess of Sussex has accused Buckingham Palace of “perpetuating falsehoods” about her and Prince Harry.

In a preview clip from their interview with Oprah Winfrey, Meghan Markle referred to the Royal Family as “The Firm”.

An extra layer to this drama is the recent hospitalisation of 99-year-old Prince Philip, and the fact that Oprah and CBS have refused to reschedule the broadcast as they’ve already sold millions of dollars worth of advertising. Can you imagine Harry shitting on his granddad during the interview, only for Prince Philip’s health to take a turn for the worse that same night? It would be a diplomatic disaster.

There’s also the element of bullying accusations made towards Meghan Markle in 2018, but which only came to the light this week, just before the interview airs. Interesting timing for sure. It does seem like plenty of Brits are unhappy about this American Hollywood-type showing up out of nowhere, marrying Prince Harry and then taking him back to Los Angeles with her, but at the end of the day Prince Harry’s a big boy who can make his own decisions, right? Looks like that includes sitting by her side and nodding in agreement as she calls his grandparents liars on the biggest primetime TV event of the year.

Can’t wait for the interview and the fallout that’s sure to come from it. How will the Queen respond? How will it affect America’s relationship with Britain? One thing’s for sure – there’s big time drama incoming.

For news that Oprah was ‘livid’ about Harry’s interview with James Corden last week, click HERE. Apparently it cost her millions.