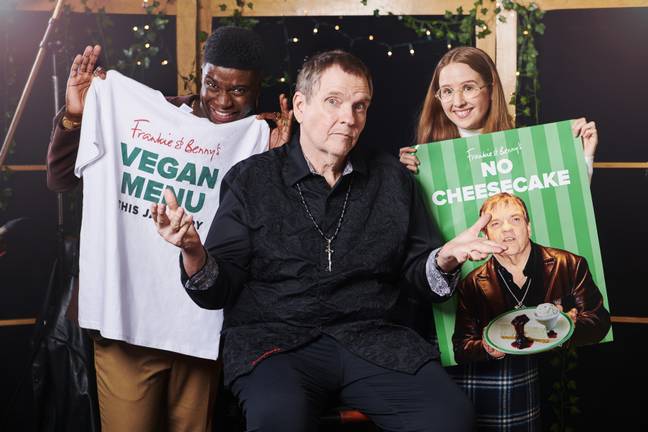 Veganuary is a great new-ish little initiative where people try and go vegan for the whole month of January and maybe raise money or something in the process – or maybe even go vegan for the rest of their lives if they enjoy it that much – and it’s becoming so popular that even people with meat in their name are supporting it.

The most high profile of these is definitely legendary rock singer Meat Loaf, who is teaming up with Frankie & Benny’s of all people to endorse their brand new Veganuary menu. This includes vegan loaded skins, vegan calzone and a vegan hot dog, although I haven’t tried them yet so can’t really tell you how good they are or anything.

In the new advert, Meat Loaf is revealing that he’s endorsing the vegan menu but he won’t be changing his name any time soon, despite having previously been a vegetarian for almost eleven years. Here’s what he had to say about it all, as well as the promo video:

When Frankie & Benny’s first approached me to rebrand to Veg Loaf I said no way in hell – I won’t do that.

But, I’d do anything for our planet and dropping meat for veg, even for just one day a week, can make a huge difference – which is why I’m backing Frankie’s new vegan menu.

I’ve had a sneak peek at the new menu, and after hearing you folks went crazy over a vegan sausage roll last year, I know you’ll love this.

I once ordered rabbit and they served it with its head on, no ears and its eyes closed.

I said, ‘Take this away and I want vegetables and a salad,’ and from that moment I became vegetarian for maybe 11 years.

People should try and have two meatless nights a week. If everyone had a meatless night, that would save 1,600 people per steak – just multiply that!

I stopped because I wanted to lose weight.

The carbohydrate diet worked to a point, I lost 30lb but it went right back on. I lost 70lb on the low-fat no-sugar diet.

You don’t need calories, you need a lifestyle change… and less fat.

OK that promo video is really dumb but I thought Meat Loaf played the character of Meat Loaf really well, so props for that. And he is looking way healthier than he used to look so I guess starting to eat meat again did help him lose weight, although that isn’t really what he’s endorsing right here right now, so he probably should have kept that on the DL. Bit silly really.
For more Veganuary, check out the new Greggs vegan steak bake. Try not to get too triggered by it though.