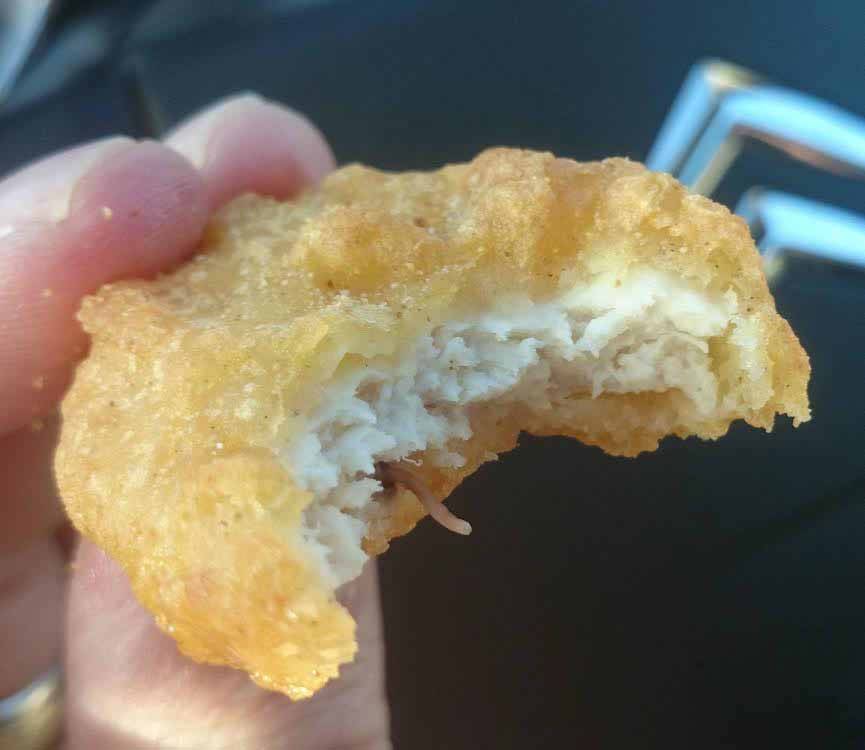 McDonald’s might have told everyone how they make their chicken nuggets, but this probably didn’t include the fact that every now and then you get a little worm inside your nugget.

That’s what happened when 30 year old Nikki Sanders bit into a nugget that her daughter had turned down (smart girl) at Tamworth’s Ventura Park. It’s also worth noting that this is pretty high class shopping centre (not). She explains what happened:

I’m very fussy about what I eat and when I saw what was in the McNugget I went white.

It looks like a worm, but I can’t swear it’s one until tests have been carried out.

Whatever it is, it shouldn’t be in there.

Nikki’s husband Neil claims that a staff member, when confronted about the problem said that ‘he would sort them out with something’. Neil instead demanded an explanation and when none was forthcoming he took the story to the papers, as you do.  A nameless McDonald’s spokesman had the following to say:

We are sorry for Mr Sanders’ experience when visiting our restaurant.We have launched an investigation following the reporting of this incident, and the object will be sent to a specialist for identification.

We will be in touch with Mr Sanders once this investigation is complete.

Great, that sounds really promising. To be honest, she’s pretty lucky she even spotted the worm because normally I’m dipping those nuggets in BBQ sauce and not exploring their insides. It’s a really lucky escape, but it also makes me think about how many nuggets I might have eaten that have weird little worm things in them too. Gross. It probably isn’t as gross as the time there was a chicken brain in a KFC though.