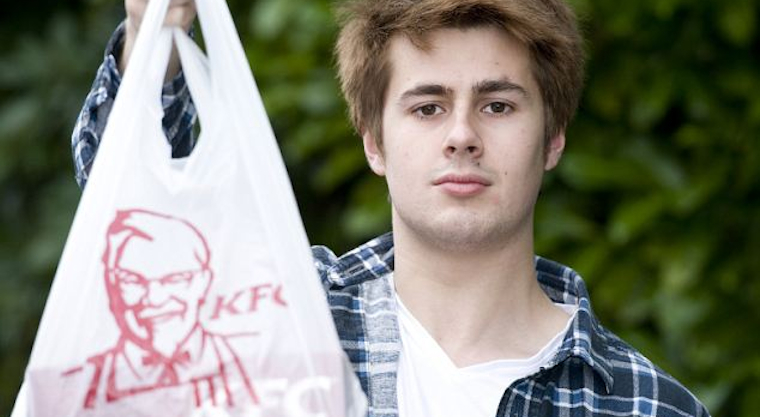 KFC is known for being finger lickin’ good, but when your meal consists of chicken brains it probably isn’t quite the same.

Some 19 year old student from Colchester called Ibrahim Langoo (awesome name bro) was on a date with some girl in Colchester and they decided to head into KFC  and share a Gladiator box meal. Real romantic bro. Apparently a Gladiator box meal consists of a chicken fillet burger and two pieces of chicken and Ibrahim let the babe have the fillet burger (classy) and tucked into the chicken himself. The first piece was cool but the second piece, ah ah no way – it was actually a chicken’s brain. EWWWW!!

Fortunately for Ibrahim he has a habit of picking the skin off the chicken (a habit that I might copy if I ever eat at KFC again) so he didn’t tuck right into the brain right away as most people would have done – which I’m sure you’ll agree is pretty lucky. Imagine biting into a bit of a piece of chicken and it turning out to be someone’s brain. That would be fricking horrendous. So yeah instead he just took a picture of it – which you can see below – and then went back up to the counter and tried to complain about it to the members of staff in KFC but as is akin to the level of customer service in most fast food restaurants they just ignored his complaints and told him to jog on and went back to frying some more of that delicious chicken.

Ibrahim didn’t really care though because he was completely freaked out at how close he came to eating chicken brains and just wanted to get the hell out of KFC and throw up in the street. Since then he has vowed never to eat at KFC again despite the fact that after making a complaint online they offered him a bunch of vouchers for a free meal. I don’t really blame the guy to be honest, I mean like I said at the start of the article I don’t think KFC is that good at the best of times but when you bite into a piece of chicken and get brain instead of meat then I would be screwing. I never tasted brains before but I can’t imagine they’re very nice, especially considering it seems like it’s only zombies that eat them and they’re hardly the smartest/most interesting demographic are they?

Predictably, KFC have apologised for the incident (and attempted to make up for it with free meal vouchers – like I just said – which is probably the dumbest form of compensation in history) but crucially have also DENIED – after a thorough examination of the picture from a ‘KFC chicken expert’, which is obviously a complete oxymoron but I’ll ignore that right now – that it’s actually a chicken brain in the chicken itself and that it’s actually a chicken KIDNEY. I dunno man, it sure looks like a brain to me, although I’m not sure if a chicken kidney is even that much better. Wait, who am I kidding of course it’s better than a chicken brain.  It still isn’t that hot though and doesn’t exactly make KFC look good. Not that much could actually make KFC look good but this makes it look really terrible. I think next time I’m craving chicken I’ll be heading to Nando’s.

Ibrahim Langoo has stated he won’t ever be eating at KFC ever again and has said he will only be eating chicken that he has prepared himself at home from now on. I respect that statement but let’s be serious, he might not go back to KFC ever again but there’s no way he’s never going to eat chicken at a restaurant ever again, I just don’t buy it. It sounds exactly like the kind of thing a dumb 19 year old would say, like when someone says they’re going to be vegan forever when they’re 19 and then they’re eating chicken wings at Bodean’s when they’re 22, like so many people I know. Fair play for the staememt though kid, and for complaining online and getting it in the newspapers.

Interestingly KFC have refused to comment on the value of the vouchers they offered Ibrahim, which raises another interesting question: just how many  free Gladiator box meals does it take to offset the trauma of finding a chicken brain in your food? Answers on a postcard. Here’s the picture of the brain that you’ve probably all been waiting for: 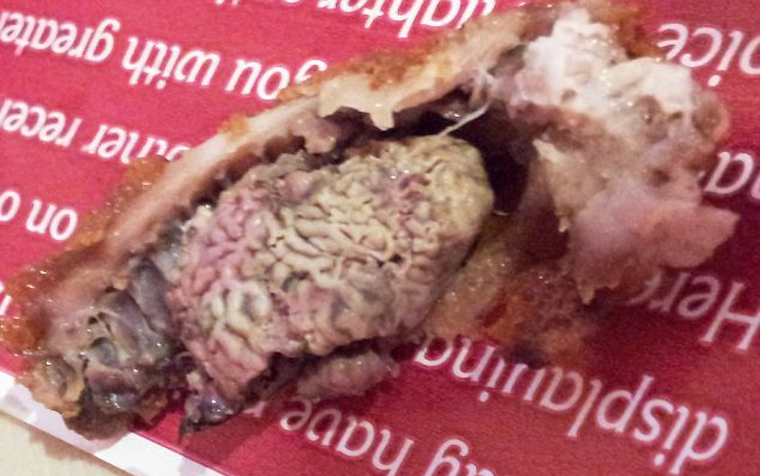