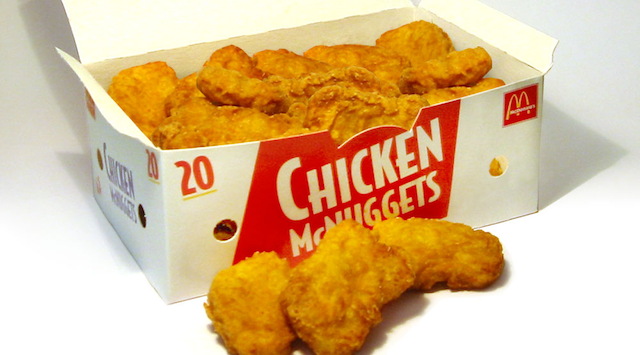 To try and dispel myths about the quality of their food once and for all, McDonalds have released this video detailing the McNugget manufacturing process. But do you believe it?

Ever since that gross picture of pink goo being squeezed into a cardboard box – that was allegedly the inside of a McNugget – was released in 2010, McDonald’s have faced a load of questions about just what is inside their nuggets. As opposed to just questions about what was in all of their food previous to that.

In order to try and combat this negative image of their food being full of crap, they’ve released a promotional video of the McNugget manufacturing (manufacturing?!) process. The video details the start to the end of the process that takes place in a McNugget factory in Cargill, Canada AKA the ass end of nowhere.

In fairness, the McNuggets look like they’re made fairly legitimately – all chicken breast, then seasoning, shaping, battered and partially fried before being sent off all over the world – and don’t look anything like that notorious pink goop but the question regarding this video has to be do you even believe McDonald’s actually do this for every single McNugget, and that the pink goop doesn’t make an appearance in some of them.

Considering how notoriously shifty McDonald’s is, I wouldn’t be surprised if this wasn’t the only way they made McNuggets. Let us know if you believe the golden arches or not.