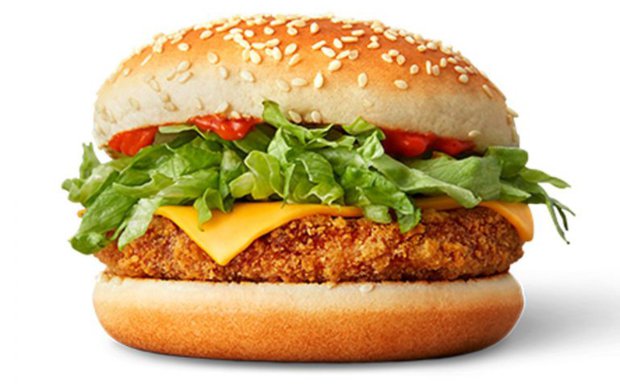 For all their faults, McDonald’s does tend to stay ahead of the food trend game and that’s why they’ve become the first major fast food retailer to introduce a vegan friendly burger. At least I think that’s what they’re claiming.

The Veggie McSpice burger is a red kidney bean patty with spicy cumin and cayenne pepper seasoning. It is served with cheese, but all you need to do is ask for it without cheese and hey presto, it’s vegan.

Unfortunately, it’s only offered in Norway – that well known vegan hotspot – but people over there seem to be enjoying it judging by these Instagram posts:

Eh. It’s no secret that I sort of hate McDonald’s food. But I felt like I had to try their new vegetarian burger. It has a deep fried bean patty with a nice texture that taste like boiled potatoes with salsa, so that’s still a no from me if you ever want to invite me to McDonald’s. And WHY do their restaurant (at least the one I visit) always smell like a cat that’s been rolling in dead rodents and freshly sprayed cow manure in spring?

#veggieburger #veggiemcspice – McDonalds now caters for vegetarians, and it actually tastes great, crunchy and spicy, and much better than a Big Mac!

Ok maybe not that one person, but at least she went in there and checked it out, which I suppose is progress for McDonald’s when it comes to vegans.

Unfortunately, unlike South Africa, Saudi Arabia, Singapore, and Hong Kong, there isn’t currently a vegan specific menu in the UK, but there are vegan options at McDonald’s if you’re a vegan and for some reason feel the need to eat there:

There are no plans to have approved vegan food on our menu. However, we do serve the following items that are suitable for people on a vegan diet: French Fries, Hash Browns, Oatso Simple with Sugar or Strawberry Jam, Garden Side Salad, Fruit Bag and Carrot Sticks.

The Veggie Patty served in our Spicy Veggie Sandwich, Wrap and Vegetable Deluxe has been approved by the Vegetarian Society and contains no animal derivatives. The patties are cooked in 100% vegetable oil in separate vats to our chicken and fish products. The sauce served in these menu items does contain free range eggs so would not be suitable. You are welcome to order your food without the sauce, just let your server know when placing your order.

I mean that’s not so bad, but in all honesty if you’re vegan you’re probably not going to be eating at McDonald’s anyway, it doesn’t really fit in with the narrative. And if you are, check out some of these delicious vegan options instead. So much better.