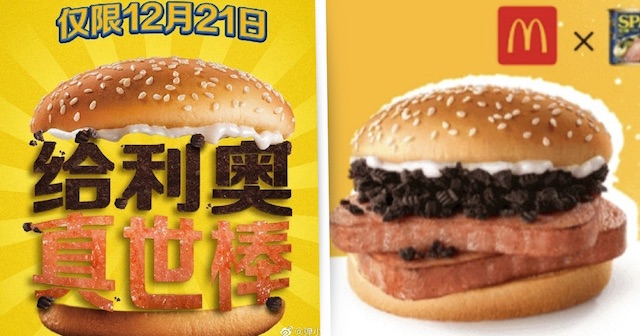 Christmas is looking like it’s well and truly cancelled in this country after the Tier Four announcements over the weekend and rumours that there’s going to be a shortage of food thanks to the border closing, so let’s check out this new culinary delight from McDonald’s over in China to try and take our minds off just how bad things have become.

I’m going out on a limb here and saying that a combination of an Oreo cookie and a piece of Spam doesn’t do appeal to me at all – in fact it sounds pretty rancid to be honest – and assume that most people over here are probably going to feel the same way. However, it’s a different story in China where there are going to be 400,000 of these produced featuring two blocks of Spam and some crumbled Oreo cookies on top of them in between two pieces of bun that also appears to have been drenched in mayonnaise. Like it really needs anything else on top of that to make it even worse?

Totally not convinced by this limited edition Christmas treat from Chinese McDonald’s, but the online reaction surprisingly seems decidedly mixed. Just kidding – it’s almost universally awful but a couple of people have tried to defend it:

Hey, if there is a market for it, who am I to judge what people eat. It sounds utterly disgusting, but so does liver paté and it’s a big hit in Denmark. And don’t Americans dip their french fries in milkshakes, or am I just gullible AF?

It doesn’t sound that bad, have you ever had diced, cold hotdog sausages with chocochip cookies? I’d add a lime and cilantro “sauce” to it.

Why would you crumble up the Oreos instead of just tossing an Oreo Big Stuf on the thing? Big miss there, McDonald’s. pic.twitter.com/JWAlz86phR

This is just destined to fail. pic.twitter.com/aR9mUfUm6b

Feels like someone went through a break up, and just went crazy on McDonalds and Oreos while watching Iqiyi.

Next day at the office: How about McDoreo?

Top Weibo Comment: If there’s no reason to come out with a new product, don’t introduce a new one

I bet if you buy one as a collectible it will stand the test of time! Time and time again…:) And it will look the same. We had a McDonalds fry tacked to the bulletin board where I worked for over 13 years. It still looked EXACTLY the same.

I have garbage sitting at the back of my closet that’s about to expire, too. I don’t go parading it around as “a hip new burger craze”.

Think those last two hit the nail on the head really? Just why are McDonald’s china selling something that literally looks like it was made up of all the leftovers in someone’s cupboard?

Part of me kinda thinks that this has just been created to stump up engagement and get people talking, but then I think that a brand like McDonald’s has literally no need or reason to pull a stunt like this so it must be real?

Well and truly baffled and would love to see what one of these actually looks like in reality because we all know McDonald’s burgers look so much better in their pictures compared to when you receive them. Please send in your pictures if they exist.

Back to Brexit, Tier Four and lack of a Christmas panic now, but thanks for the distraction McDonald’s China. I’m lovin’ it.