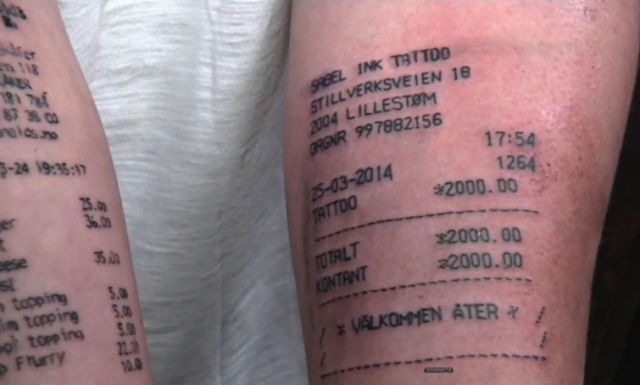 Remember Stian Ytterdahl from last week? He’s doubled up with a second receipt tattoo on his other arm.

Remember Stian Ytterdahl from last week? The guy who got the McDonald’s receipt tattooed onto his arm after his friends complained he was getting too many girls and should mark himself with a stupid tat to even out the playing field? Well, he’s just gone and tattooed his other arm, which if you ask us has completely ruined what he set out to prove with the original.

The whole point was that he was actually crazy enough to get the first tat done, but he totally made it his own, became famous for like 5 minutes and probably got even more girls in those 5 minutes than ever before. Basically took his friends’ cock-blocking motives and flipped them around to his advantage.

But now what? What was the point of the second dumb tat? Last week he was the coolest kid in Norway and now he’s just some kid who gets receipt tattoos. Completely kills the magic of the original tattoo and the whole story behind it. You took it too far Stian. You took it too far. You took a great story about an awful tat and turned it into just two awful tats. Cover-up city, here we come.

â˜› More Terrible Tats: This Is Why Retards Shouldn’t Tattoo