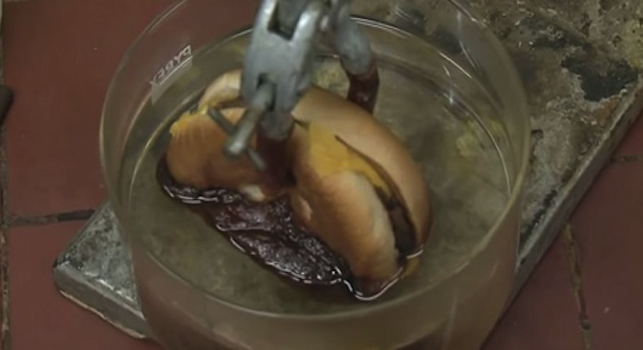 McDonalds often gets a crappy reputation and who can blame the haters, really, especially when people leave one of their cheeseburgers on a shelf for a year and it doesn’t even decompose because it’s so full of crap? Nobody really, that’s who.

And this video is hardly going to help their cause either, even though it’s definitely set up for maximum shock value and not entirely 100% accurate. Basically the University of Nottingham (big up) set up an experiment a while ago where they saw what happened if you placed a McDonalds cheeseburger in stomach acid. Basically, after three and a half hours it had turned into a really gross black goop that looks really unhealthy and bad for you

But yeah, even though this looks completely disgusting there’s a lot wrong with this experiment which doesn’t necessarily add up. For one, if this was a real experiment it would be pretty useful for the scientists to test something else being dissolved by hydrochloric acid in order for comparison – preferably something supposedly healthy like a chicken salad or something.

Secondly, a whole cheeseburger would never find its way like that into your stomach – it would be all chewed up into little pieces before it made it there – and thirdly your stomach doesn’t solely consist of hydrochloric acid to help you digest your food. The hydrochloric acid merely helps break down the food and then some digestive enzymes do the hard work for you.

So although this black sludge looks really rank and digesting (not that many big ups to the University Of Nottingham – always knew that place was a shithole), we haven’t really got a clue what it actually means for when the cheeseburger is travelling through your stomach. Except probably that you’re gonna shit it out the other side sooner rather than later.