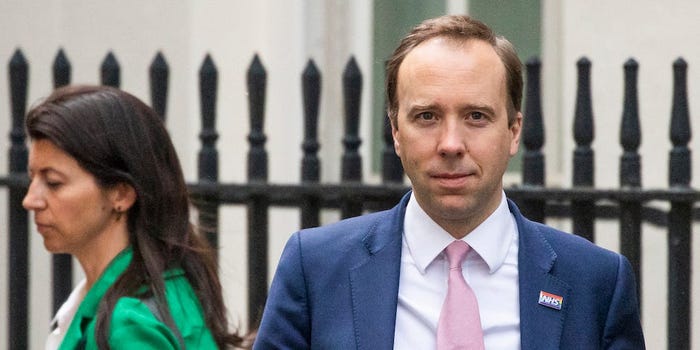 Obviously the headlines have been dominated by the news that Health Secretary Matt Hancock has been busted having an affair with Gina Coladangelo – who he also hired to a role that she didn’t really have any experience in on taxpayer’s money – and now a video clip has emerged of Hancock slamming a scientist for breaking lockdown to have an affair. Ironic huh?

Not sure if people are more pissed off with Hancock’s corruption in hiring Coladangelo so he could shag her at work, the fact he had an affair in the first place or the fact that he quite clearly broke his own social distancing guidelines during the pandemic, but whichever it is this video is guaranteed to make you laugh. The clip concerns Hancock’s reaction to the news that scientist Neil Ferguson – whose company had been instrumental in putting Britain into the first lockdown – had broken his own social distancing rules by allowing a woman he was having an affair with to visit his house twice.

Hancock said that he had to resign and that he should probably be prosecuted:

These revelations are extraordinary and I’ve been left speechless.

Everyone has got to follow the social distancing rules.

I think he took the right decision to resign.

It’s just not possible to keep him on in these circumstances.

Lol. Those have certainly aged well haven’t they?

Hancock should probably resign if that’s the way he feels about these things, but we all know that it’s a case of ‘do as I say, not as I do’ with this government and it seems like there will be a very real possibility that nothing will actually happen to him. He’s already apologised and Boris Johnson has said he’s OK with that and the matter is closed. Does someone have to straight up murder someone in this administration to lose their job?

For more of the same, check out this thread of Matt Hancock being completely weird. He’s such a strange character.