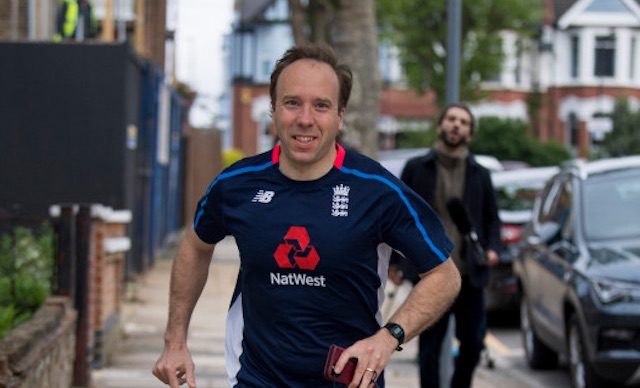 Dominic Cummings has been appearing at a government inquiry about the handling of the Coronavirus pandemic today and he hasn’t exactly minced his words, condemning his own performance during the crisis and saying that Health Secretary Matt Hancock categorically should have been fired for about twenty different incidents.

Matt Hancock was obviously aware that he was going to be a target of Cummings during the inquiry so decided to handle the situation in his normal manner – by ignoring any questions that were asked of him and talking about something completely different before running away. He was filmed jogging near his London home in an England cricket top when he gave the following interview:

Lol. That’s so funny. The guy has been failing to answer direct questions for the last year and a half but I don’t think I’ve ever seen him as shook as he was in that little snippet.

I would say that it’s top class banter if it wasn’t so depressing and so many people had died because of his ineptitude. What an absolute idiot.

I want to at least think that he might lose his job after Cummings’ testimony today or at least face some repercussions, but it just doesn’t really seem that likely does it given how this government seems determined to protect their own the majority of the time. I guess we’ll see.

For more of the same, check out this super thread about Matt Hancock being weird. Really is awesome.