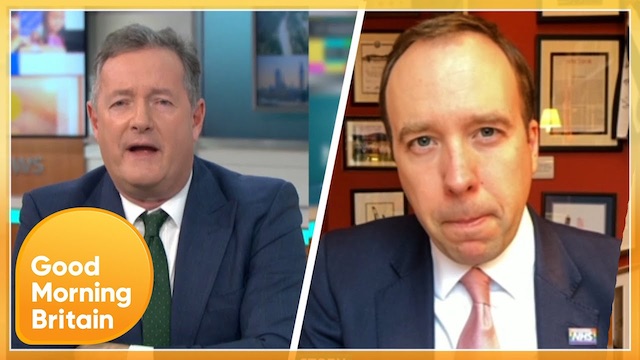 The free school meals issue has exploded once again this week after private companies with Tory links were accused of profiteering by providing £5 worth of food instead of the £30 they’re supposed to be shipping out, but thankfully  Matt Hancock decided to appear on television today to try and clear up the situation.

Let’s be clear, I mean ‘thankfully’ in the way that he’s shown up and decided to remind us all again of just how truly awful and repugnant this government are by refusing to admit that they’ve ever done anything wrong, just in case anyone thought that they might actually be listening to the people that they’re supposed to be serving and not just helping their mates get rich. Seems the only way they ever change their policies if Marcus Rashford manages to mobilise the whole nation against them AGAIN.

Anyway, Hancock was appearing on ‘Good Morning Britain’ this morning, where Piers Morgan asked him if he regretted voting against providing free school meals previously as he was now saying that he was ‘glad’ that the situation had been sorted out. Sure you can predict his answer here: (1st clip is the relevant bit, 2nd clip is the whole interview):

Matt Hancock – I’m really glad that we can send out free school meals when schools are out.

Piers Morgan – If you’re that glad… why did you vote against giving free school meals?#GMB pic.twitter.com/pGJxWYi0EX

Ugh. I wish just for once they would admit that they got it wrong and made a mistake instead of constantly U-turning on almost every decision and acting like everything they were doing was right in the first place despite changing their minds on virtually everything over the past 12 months. It’s so painful and awkward to watch them repeatedly get interviewed and refuse to answer questions or admit even any slight culpability or off any explanation for their failed policies that they seem to champion over and over again before changing at the last minute.

It’s got to the point where it’s barely even news now because it’s so common, but here we are. Won’t be the last time either. Wouldn’t be surprised if something similar happens in the next 24 hours to be honest.

Anyway, looks like £30 vouchers are back as of today – at least according to the below tweet from Jack Monroe – and the government is scrapping sending out food parcels thanks to hers and Marcus Rashford’s intervention again yesterday.  Another A+ job from the government – if you listen to them that is.

NATIONAL FREE SCHOOL MEAL VOUCHER SCHEME IS COMING BACK NEXT WEEK! We did it!!! THANKYOU!!!!

I’m crying into the cat 🐈 Christ I need some sleep

For more of the same, check out a thread of every weird thing that Matt Hancock did last year. Takes a while to get through it all.