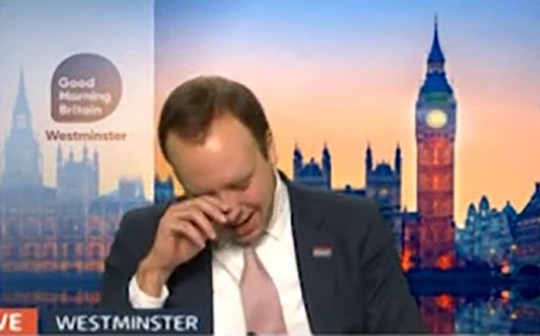 Is he actually crying here?

A huge day in the Coronavirus saga today as 90 year old Margaret Keenan and the unfortunately named 81 year old William Shakespeare became the first people in the world to receive the Pfizer vaccine and hopefully signal the beginning of the end of the virus’s control over our lives.

Of course, Matt Hancock was there on live television to provide his thoughts and analysis on the matter and couldn’t help but get emotional and look as if he was shedding a tear at the sight of the first vaccines being administered, both on Sky News and Good Morning Britain. Must have been a pretty poignant morning for the guy, although most people on social media just laughed at his poor attempts at fake crying and looking emotional as he clearly doesn’t have much experience of either.

Take a look at the two appearances below and see what you think:

Health Secretary Matt Hancock becomes emotional hearing the words of the first man in the world to receive the vaccine, William Shakespeare.

He tearily says ‘it makes you so proud to be British’.@piersmorgan| @susannareid100

It’s been such a tough year for so many people and there’s William Shakespeare putting it so simply for everybody that we can get on with our lives.

There’s still a few months to go. I’ve still got this worry we can’t blow it now, Piers.

We’ve still got to get the vaccine to millions of people and so we’ve got to keep sticking by the rules.

But there’s so much work gone in to this that I’m really, really… it makes you so proud to be British.

And just watching Margaret there – it seems so simple having a jab in your arm, but that will protect Margaret and it will protect the people around her.

Yeah, he doesn’t do emotional too well does he? I suppose he didn’t really have any need to be emotional throughout the past year when his actions/inactions and constant U turns led to one of the highest percentage death tolls in the world, so you can understand why he might find it kind of difficult.

Anyway, we probably shouldn’t underestimate how monumental these vaccinations are in the fight against Coronavirus, but I suppose we still have to hope that they actually work and there aren’t any side effects like all the anti vaxxers out there are telling us? Gotta watch out for microchips too, but maybe this is the end of the lockdown nightmare? Don’t hold your breath.

For more of the same, check out Matt Hancock getting ambushed by ‘Good Morning Britain’ a couple of weeks ago. That was funny.