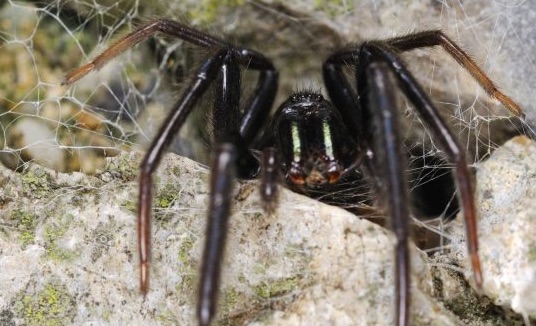 We’ve been warned in the past few days about the possibility of a massive influx of spiders in our homes this autumn after summer conditions made perfect breeding conditions for them and now we’re seeing video evidence of it.

The creepy footage comes from a guy named Chris Brown who noticed the silk threads from the spider’s web on a hole in the brickwork outside his office earlier this week. He decided to lure the arachnid out using a kebab stick and was pretty terrified to discover that it was a massive green fanged spider, which promptly wrapped its legs around the stick and dug its fangs into it and tried to pull it down the hole.

Chris said the following about the spider:

When I was a kid I used to lure spiders out their nests with sticks, I thought I’d try it again and then I found it.

There are another four spiders in the hole.

Geez. Not sure what kind of a childhood Chris had if he actively enjoys doing stuff like that and still likes doing it now, but I suppose it’s better than being a major wuss and scared of spiders like me isn’t it?

In case you’re worried, the green fanged spider might actually bite you if you run into one and apparently it feels like a bee sting but there are no lasting effects. Sounds like you should watch out for them though anyway hey if you don’t wanna feel the pain.

The spiders generally prefer to eat moths, cockroaches, bees and wasps and also their own mothers. Charming.

For more spiders, check out this bizarre mutant spider that was recently discovered down under. Truly shocking.