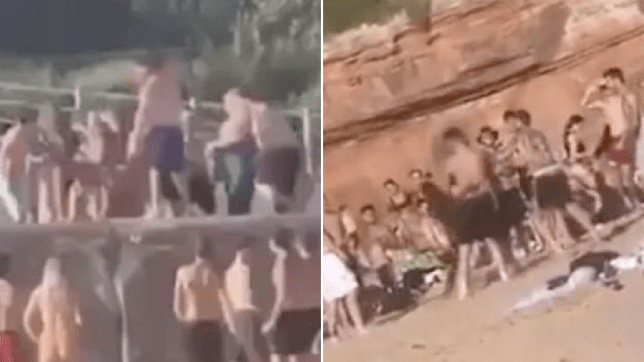 Another great example of British culture.

It was a veritable heat wave in this country yesterday and loads of people ignored government advice to head to the beach and live it up, completely packing them out and causing everyone else in the country to question why we were all staying indoors.

Whilst this is already pretty frustrating for a lot of us, it gets to a whole different level when you see dumb idiots fighting each other on the beach as well, but of course this is what was going down yesterday with up to 200 people getting involved at Exmouth beach in Devon apparently. Not really sure how 200 people can get involved in a massive beef with each other – what could they all be so pissed off about? Surely they can’t all know each other? – but the video evidence is here so you can’t really dispute it:

OK so not quite 200 people there but certainly a few. Here’s what a guy who was hanging out at the beach had to say about it all:

I’m lost for words after witnessing the absolutely shocking behaviour.

As we were leaving my son, who is 7, got knocked while they were fighting in massive groups.

Would easily say 200 people plus, it was horrendous.

Yeah, two things about this. Firstly, you’ve gotta love how people going to the beach are criticising other people for going to the beach like they’re somehow better and secondly how the hell do British people always manage to ruin everything? I mean going to the beach is a bit of a dick move in the first place but at least have a good time whilst you’re there and don’t get into a massive fight, right? Baffling.

For more of the same, check out this footage from another fight at Broadstairs park. Ouch.