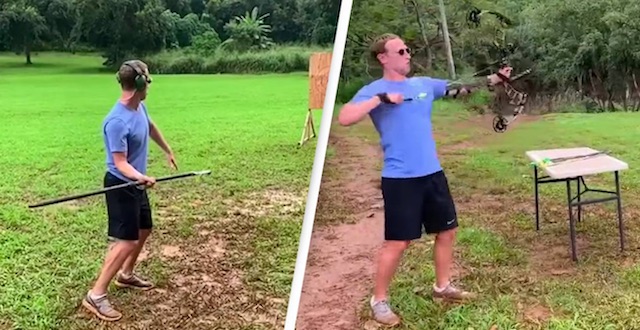 What the hell is he up to?

Ever wonder what the richest men in the world get up to in their spare time?

Well, thankfully Mark Zuckerberg has decided to give us an insight into his private life by uploading a couple of videos seemingly engaging in some primitive sports/pasttimes as he’s throwing spears and firing arrows in them, almost like he’s taking part in an old school version of the Olympics with himself. He’s firing at wooden targets and bowling pins and jokes that he has a ‘certain set of skills’ a la Liam Neeson in ‘Taken’.

Yep, that’s very weird behaviour but apparently it can all be explained by the fact that Zuckerberg wanted to go hiking on a trail somewhere, but there weren’t any hiking permits available and so he had to apply for a hunting one instead. It all makes sense now!

Of course, he probably could have done all this without updating his Facebook status and telling the world about it – which seems to be what more and more people are doing these days – but I suppose it wouldn’t really be that in keeping with his personal brand would it? I suppose we can all be thankful that he’s not training for a world where he destroys all technology and forces us to go back to the primitive, which was my first thought when I saw these videos I gotta be honest. Phew.

For more of the same, check out when the internet completely roasted Mark Zuckerberg for going surfing with a full face of sun screen. Of course they did.