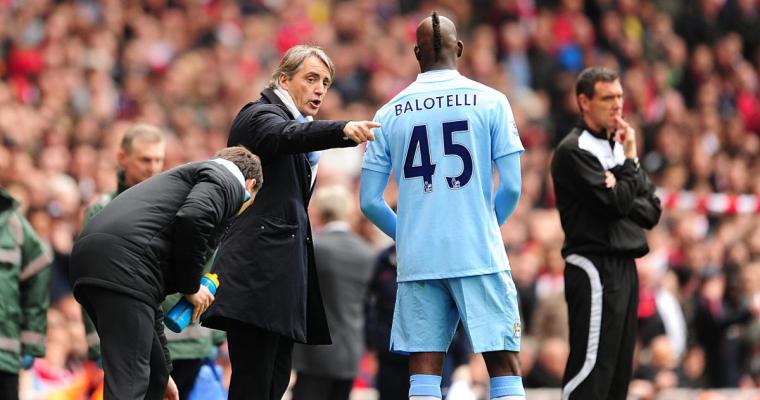 At roughly 6.10pm on Sunday evening a strange sound filled the air up and down the country. The sound is unmistakable. It’s the feverish hammering of typewriter keys, sports journalists nationwide getting to work on destroying the Premier League career of a troubled young man. That man is obviously Mario Balotelli.

We’ll start with what actually happened because I want to make clear that I am not excusing Balotelli or his actions. His knee-high studs-up challenge on Alex Song 10 minutes into the game was disgusting and any retrospective ban that comes his way will be justified. In fact it took another 78(ish) minutes for him to get himself sent off, picking up a second yellow card for his third rash challenge of the game. Man City went on to lose that game, City ‘lost’ the title and Mario Balotelli was to blame.

He’s been labelled a disgrace, a clown. The typical, narrow-minded football fan in me decided ‘he does that kind of stuff because he’s a dick.’ But is he? I think we need to lay off him just a little bit. Here’s why:

It appears to me that he has some kind of psychological problem. I’m not a psychologist and only got an E in my psychology AS-level (didn’t even complete the full A-level). This is just how it looks to me.

He has a manager who understands him and his problems and is trying to help him manage his life and stop him behaving like an idiot. Roberto Mancini can never win that battle though due to the national press.

What our nation’s media doesn’t seem to realise/care about is that their inclination to make heroes and villains out of people at the drop of a hat can have serious psychological effects on their victim/subject. When he was scoring goals and living up to his potential, and City were on their title charge, the press indulged his eccentricities and turned him into a bit of a cult figure.

Balotelli, as impressionable as he is, loved that attention and was all too happy to play the clown. Now City and Balotelli are having a dip in form, they want us to believe that it’s those same eccentricities that are causing it, but, there are 10 other players on the field also not pulling their weight. It just seems wrong to point the finger of blame at one man Let’s remember he was sent off after Arsenal scored and the week before was the man dragging his team back into the game against Sunderland.

A possible reason for Balotelli’s erratic behaviour is due to his ever changing media perception. Here’s a lad who at the start of the season was getting all this praise, and then out of nowhere the press want the public to turn on him because they need a scapegoat – a controversial one at that because in this country, controversy sells – and as he’s only 21, he really wasn’t ready to deal with this negative scrutiny that was suddenly forced upon him.

The National Media should be the focus of most people’s ire. They aren’t thinking about the enlightenment of their readership – they only think in pound signs. They have identified Balotelli as the man who will keep the money coming in. Their goading of him, like the little devil on your shoulder encouraging you to make the wrong decision, is nothing short of despicable.

Regardless of where your footballing loyalties lie, we can’t just accept that this is a good way to treat a human being. They encourage this troubled guy to misbehave and then tell us that as ‘proud’ English football fans we shouldn’t allow him to sully the image of English football. This to me is cowardly and pathetic.

I’m far from being pro-City, my allegiances lie with the red-half of Manchester. However, this is more than being about football. Journalists think that just because these people are playing a game their articles should be considered playful. The press have manipulated Balotelli, they’ve transformed him into this cult figure, this joker, and have now decided ‘his time is up, he’s had his hero status for too long, let’s see just how much damage we can do to his career.’ There is nothing playful about this kind of behaviour, that’s bordering on evil.

I know you can point out that the media don’t make him do the stuff he does. You have a valid point. This is where his employers should step in. If they are convinced that he needs help then they should do everything in their power to persuade him to get some.

This is where the whole football system falls down. In any other industry, if an employee looks like they need some professional help, then the company will give them some time off work to sort themselves out. Football doesn’t really allow for this. In most cases the players are seen as money-makers; if they are taking time off work for something as trivial as psychological damage then how can they help the club make any money?

This kind of break would do footballers good. They are constantly in the limelight and it is impossible for the pressure not to build. Some people know how to handle that pressure and others do not. Take football and the celebrity associated with it out of the equation, take the player away from the limelight for a little while, lift that weight on their shoulders and I have no doubt that you will see an improvement in the way that player conducts himself. If Man City gave Balotelli some time off work, the media wouldn’t care; they’d look for somebody else to make a laughing stock out of.

That is the fickle world of football journalism. It disgusts me and needs to be stamped out as it is just ethically wrong. When I write about something football related, I’ll either decide to write as a ‘typical’ football fan, where you’ll get a completely unbalanced argument, or I will look at the bigger picture. If I write as a football fan then I’m not expecting people to take me seriously. I recently wrote a piece about Arsenal and got no end of abuse but I can admit that I deserved it as my article had no real point.

As a Man United fan, I should be happy with Balotelli’s implosion as it can only benefit United as the season reaches it’s climax. In his situation though, you have to look at the bigger picture. We get so wrapped up in football and football rivalries that we will eat up anything that is fed to us from the various newspapers on sale up and down the country.

This guy is a human being, a human being with problems. The media’s manipulation of a bewildered young man living in a foreign country before cruelly and methodically destroying his reputation is barbaric. Unfortunately, we live in a country where national newspapers don’t laud sports stars like heroes but are only intent on finding ways to bring them down a peg or two. There’s talk that Mario Balotelli should leave the Premier League and I agree with it.  I think for the sake of your career but more importantly your sanity, Mario, you’re better off away from that kind of treatment.