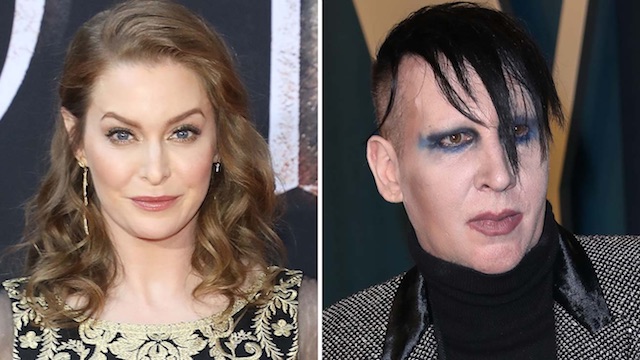 He keeps getting worse and worse.

It seems like a really long time ago that everyone was freaking out about the seemingly obvious revelation that Marilyn Manson was a complete and utter psychopathic weirdo even though it was only a couple of months ago, but now his former girlfriend Ashley Morgan Smithline has decided to bring us some more unhinged and depraved revelations about the disgraced goth superstar.

Smithline was speaking to PEOPLE about her two year relationship with Manson:

He bit me, whipped me, cut me with a swastika-emblazoned knife and shoved his fist in my mouth during sex as well as forcing me into a blood pact with him.

He cut me on my stomach and then drank my blood.

Then, he had me drink his.

He also placed me in a glass soundproof ‘bad girls room’ whenever I angered him.

Whenever I went away on trips abroad, he would make me bring back Nazi memorabilia.

I think at that point, I was already coerced enough that I felt he would not like me if I didn’t bring those things.

If I’d known the weapons would be used on me, I think it would have felt a lot stranger.

Jesus Christ. Every time I hear a story about Manson I can’t think that it can get any worse, but then it turns out he’s obsessed with Nazism and has a glass soundproof room that he places women in when he’s mad at them. That’s some serious psycho Josef Fritzl shit and even if you’re into kinky sub/dom shit, I don’t think there’s any room for trapping someone in a place like that for any amount of time for any reason.

Maybe I’m wrong though and there is an audience for that, the important thing to remember though is that Ashley Morgan Smithline absolutely hated it and so did all of Marilyn Manson’s ex girlfriends who have come forward about his behaviour as well. Sad thing is that consent on these matters is a very murky subject so it looks unlikely he’ll ever stand trial in court over them, but I suppose at least he’s cancelled and probably won’t ever perform again. Will probably keep doing stuff like this forever though to vulnerable women. Awful.

For more of the same, check out everything that people have already said about Marilyn Manson. There’s a lot to get through.