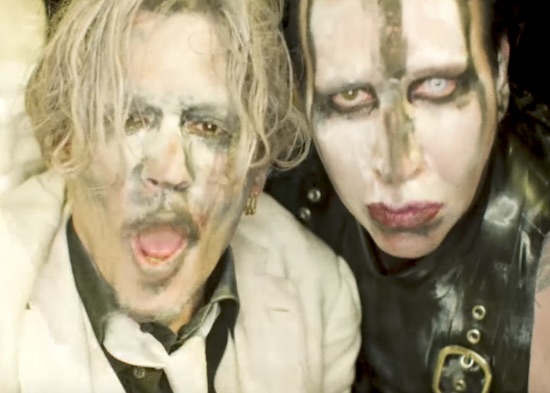 It features the pair as the masters of an underground sex dungeon populated with naked women.

Marilyn Manson is enjoying somewhat of a renaissance recently with the release of his new record Heaven Upside Down and of course he wanted to invite all of his best buddies to the party as well.

You might not know this, but Johnny Depp and Marilyn Manson are pretty good friends, so it makes sense that Manson would rope Depp in to star in one of his new music videos. This one is for a song called ‘Say 10’ (get it?) which features the pair as masters of an underground sex dungeon full of unclothed women.

Pretty much just a day in the life for Manson:

Cool, love seeing women dressed in leather rub themselves and get ravaged by Manson and Depp whilst he sings dumb lyrics like ‘Cocaine and Abel’ over and over again. He sounds kinda like Ozzy Osbourne in the chorus though which is a bit different/weird for him eh?

Clearly set for another 20 years at the top though or until he dies, whichever comes first. If you haven’t seen the other very NSFW video from his album yet, then what are you waiting for, click here. Featuring very scantily clad nurses with bazookas.