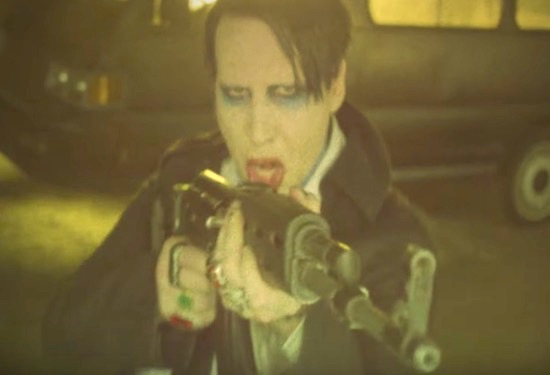 We brought you the news last week that Marily Manson was returning with a new album and the lead single ‘We Know Where You F*cking Live’ and we probably should have realised that he was going to follow this up fairly shortly with a new outrageous music video.

And we wouldn’t have been wrong at all as he dropped the video to the song over the weekend and it’s pretty much everything you expect from Manson in all his usual OTT extravagance. This video features a gang of sexy nuns hanging out with him and pretty much blowing up the whole neighbourhood and killing a few people for good measure too, in what is surely going to prove kinda troublesome and controversial for him. I mean it kinda comes with the territory for the guy though doesn’t it – you wouldn’t really expect anything less, right?

Geez. Kinda brutal when they just shoot that guy point blank outside the house – not really sure how Mazza is gonna get away with that one?

I suppose the ‘plot’ of the video kind of fits in with the song too, even if it is a bit messed up and gross, so it kinda makes sense, still seems a bit of a risk putting a video like that out now in the current political climate. Classic Manson though really isn’t it, like I already aid before. Why bother teaching an old dog new tricks?

For more Marilyn Manson, check him out claiming that he invented grunge. Not sure about that mate.