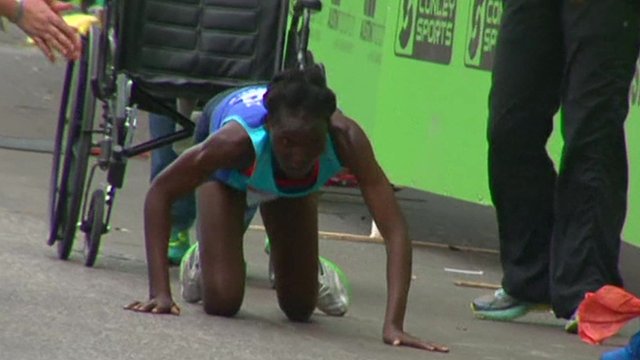 Shame on anyone who finished after her.

Kenyan runner Hyvon Ngetich was leading the Austin maration in Texas on Sunday when suddenly 23 miles in, she collapsed with exhaustion.

Instead of accepting a lift from a couple of medics and their wheelchair however, 29-year-old Hyvon crawled over the finish line on her hands and knees and finished in THIRD. Third! How shit was everyone else that they finished behind the person who crawled on their hands and knees?

After the race the event director John Conley announced to Hyvon:

Bravest crawl? Well, I guess it was brave. She looks positively knackered trying to make it over that finish line that’s for sure; drool leaking everywhere, eyes busting out of her head and she still made it over. Gotta respect it.