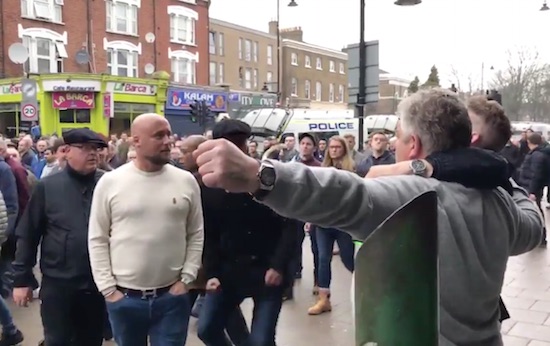 He had it coming.

Millwall fans are known all around the world as being some of the hardest, most no nonsense and violent football fans out there, so when you’re playing them it’s probably not the best idea to antagonise them before the match. Of course, football fans being football fans they’re not all going to follow this mantra, but you’ve got to admit that the guy in the video only has himself to blame for what happened to him.

Spurs thrashed Millwall 6-0 in the FA cup yesterday and some of the Spurs fans couldn’t resist the banter with the Millwall lads. Before the game, a couple of the drunk idiots were chanting ‘we fucking hate Millwall’ over and over again as Millwall fans walked past them, and one of them eventually decided to do something about it and casually knock one out, no questions asked before or after the punch:

Nonchalant. Love the way he doesn’t even say anything or give the guy any forewarning that he’s about to spark him out. Just get the business done, no questions asked those Millwall lads.

In all seriousness I can’t really condone football violence because it’s fucking stupid when you think about it, but those Spurs fans were asking for a fight so I’m kinda glad they got one. The police are now investigating the video, so I imagine that guy from Millwall will probably get what he deserves too. So it goes.

For more football violence, check out the ultimate football hooligan movie finally getting a sequel, all these years later. Who would have thought it?