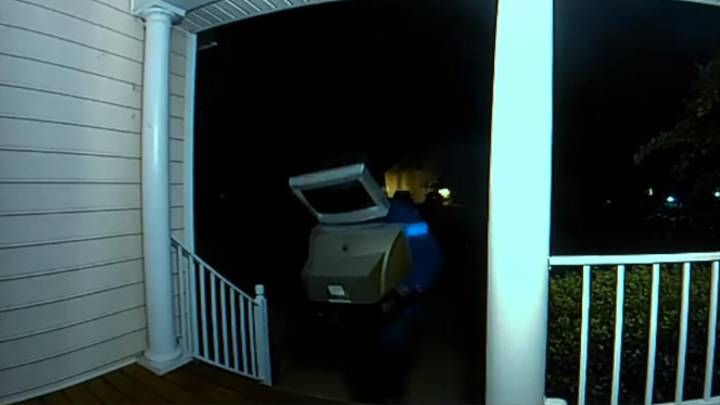 This isn’t one of the weirdest stories that we’ve ever covered on Sick Chirpse but it would probably sit comfortably in the top 100 up there because it’s just so damn out there and almost completely unexplainable.

We’re over in Henrico’s Hampshire in Virginia for this one where several residents were surprised to wake up on Sunday morning with a television set outside their door. This became even stranger when it was revealed that there were around 50 people out there who found new television sets on their doorsteps with no clue how they arrived there.

Of course, things went to an even higher level when it was revealed via the security footage of several residents that a man wearing a television on his head had delivered the TV sets to all these residents. What the hell is all this about?

Anyway, here’s what resident Jim Brooksbank said about it all:

He’s committed to his trade.

He wants to be known as the TV Santa Claus. I don’t know.

The police did a great job of coming up and collecting them all.

He doesn’t seem that bothered or pranked out about it at all, and neither do the police. After they collected the TVs they’ve decided not to investigate further. Maybe the TV Santa Claus will strike again next summer though? Stay tuned.

For more of the same, check out this vertical TV that Samsung have just invented. Revolutionary stuff.