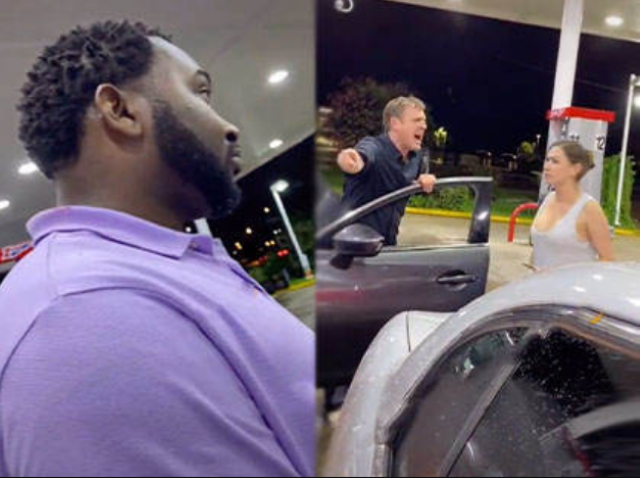 It’s never great when you’re having a public spat with somebody and your partner decides to take their side on it, but my guess is you’d have to be very much in the wrong for that to happen.

For whatever reason, this lady named Erin is harassing a black couple and accusing them of being drug dealers, and let’s just say her hubby is having none of it…

Smart guy. How many times have we seen clips on the internet where an overly aggressive female involves her man in a dispute and he ends up getting beaten to a pulp, with the footage immortalised online for all of eternity. This dude knew his wife was in the wrong and let her know it, while also trying (and failing) to get her in the car and leave. Probably an even better result for him that she just walked off and left him in peace.

Part 1 of the footage keeps getting deleted but you can watch it below for now – suggests Erin and her man were already arguing and maybe she got wound up that this couple was filming/laughing at them?

Either way, as I said, well handled by the guy. In an alternate universe he’d have stuck up for Erin and we’d probably be watching a different kind of video altogether – one that ends even less well for him. That’s a man with his head screwed on tight. Although he is married to that lunatic so maybe it’s not screwed on that tight.

For the girl who summoned her boyfriend to her workplace so he could fight her co-worker, only to watch him receive a WWE-style Rock Bottom for his troubles, click HERE. Choose your battles wisely.