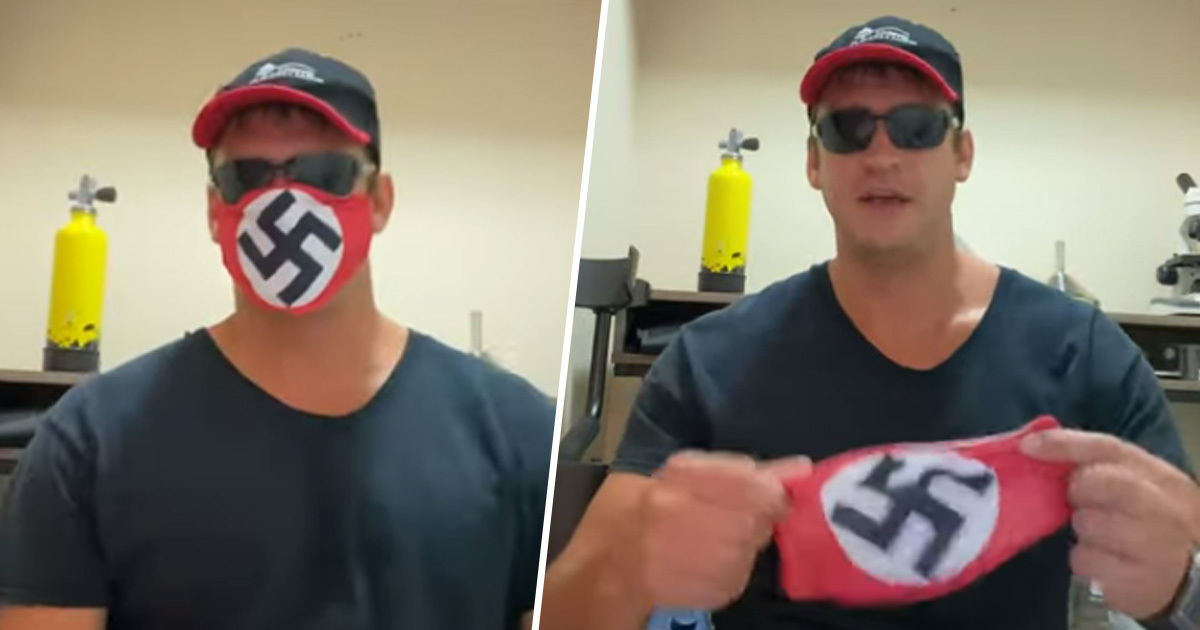 It’s only midday on Monday and we’re already being faced with a story about wearing a mask that’s more unbelievable than any of the ones that we featured last week. You just gotta wonder how the situation keeps escalating to even more ridiculous heights.

I think this guy Brad Braddock – who probably couldn’t have a more Republican/white power name if he changed it himself – is definitely one of the most angry people we’ve encountered so far about wearing a mask as he’s decided to wear one with a swastika on it to protest how being forced to wear one is like living in Nazi Germany. I’ll be honest and say that I’m no expert on Nazi Germany, but I don’t think that being made to wear a mask is literally anything like that, especially considering how he talks about it in his little video below as being part of the socialist agenda. That’s literally the opposite of what Nazi Germany was all about.

Anyway, check out the video below and have a good laugh at it because if you don’t laugh then you’re probably gonna be kinda terrified that someone can even think about stuff like this:

These socialists love to force their opinions and their beliefs and make it law, everyone has to do this now or else.

Or else what? You going to arrest me?

You know, I bet you would love to arrest me and throw me into jail and what-not.

Yeah I mean, I’ve been fairly vocal on how ridiculous I think that people who refuse to wear masks are being, but I suppose if you don’t want to then you have every right to protest against it. I don’t think that anyone should ever be wearing a swastika on their clothing though given the connotations of that symbol and what it means to so many people, so I can safely say that Brad Braddock definitely is the worst anti masker I’ve come across so far. He’ll probably be topped by someone even more unimaginable tomorrow though the way things are going.

For more of the same, check out this Karen who doesn’t wear a mask because she says that pants don’t stop farts. Sure.