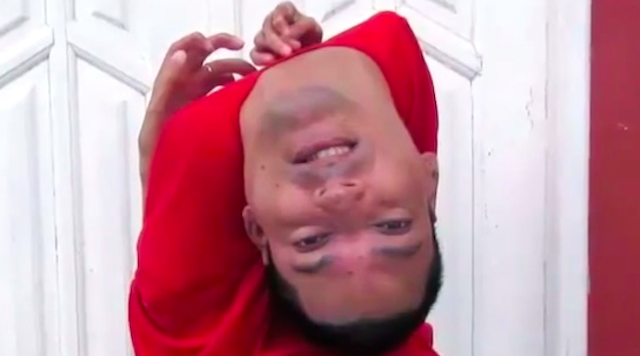 His parents were advised to stop feeding him when he was a baby as there was no way he would be able to live a normal life with such crippling disabilities.

Claudio Vieira de Oliveira from Monte Santo in Brazil was born with some of the most extreme physical disabilities that anyone has ever seen – they’re so extreme that his head is literally upside down at all times, bent over backwards at his neck. His hands and legs don’t work either. The condition is called congenital arthrogryposis and has led to his limbs being fused which means they are pretty much non operational.

When he was a baby his parents were advised to stop feeding him and let him die as there was no way he would survive and even if he did that he wouldn’t ever be able to lead a happy and fulfilling existence. They refused to do this and Claudio proved their defiance right, as he’s now 37 and managed to learn to write using his mouth and became a qualified accountant, as well as an inspirational public speaker.

Claudio basically took the bad hand he was dealt (2 + 7 off-suit- pretty much the worst hand in poker) and absolutely smashed it, which is more than most of us can say and really puts some of the crap we moan about into perspective. You can hear all about his inspirational story in the short video below, although it does look as though it’s been made from someone in the 80s imagining what the future would be like. It’s even narrated by a computer.

Let’s hope that the kid with the giant hands recently discovered in India can have an equally fulfilling end to his story too.